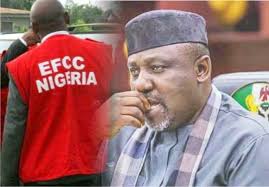 Former Governor of Imo State, Senator Rochas Okorocha has accused the past government of Emeka Ihedioha and the Peoples Democratic Party, PDP, of instigating the Economic and Financial Crimes Commission, EFCC, “to be on his neck”.

The former Governor also denied claims by the Economic and Financial Crimes Commission, EFCC, that the anti graft agency recovered N7.9 billion naria from him.

The EFCC zonal Head, Usman Imam was reported to have said that N7.9bn belonging to the Imo State government, was recovered from the former Governor during investigations, urging him to get ready for his days in court.

The former Governor in a statement signed by his media adviser, Sam Onwuemedo, Friday, called on the EFCC or Mr. Imam, to publish details of the bank where the money was found and owners of the account.

The former Governor said while he holds the commission in high esteem, the Commission or Mr Imam should take his denial seriously, because Nigerians would like to know who is speaking the truth or not.

He stated that the properties the commission had marked were his personal property he acquired twenty years ago.

Okorocha recalled that before the 2019 elections, the PDP elements in Imo State had written to the EFCC, making allegations that he wanted to use all state funds to finance the election of his choice candidates.

He noted that the EFCC leveraged on the petitions, and seized all accounts including accounts for payment for salaries, pensions, severance allowances etc, a claim which the commission never faulted.

He accused the PDP government of Ihedioha for instigating petitions against him and his family.

He stated that despite the fact the PDP government petitioned the commission and commission acting on those petitions, the past government went ahead to set up more than twelve panels to probe him and his family on the same issues the EFCC is investigating.

Okorocha said the EFCC is misinformed, which the commission is using to conduct media trial.

Imo Politics: Why We Dragged RAP To Court, Lawyer, Others Give...

innonews - July 27, 2020 0
For distracting Governor Hope Uzodinma, a lawyer and some human rights activists have dragged the Reformed and Advancement Party, RAP, and it's...

innonews - March 28, 2021 0
FROM = EVEREST EZIHE, Owerri In view of the recent tremendous development and transformations in sports infrastructural facilities in...