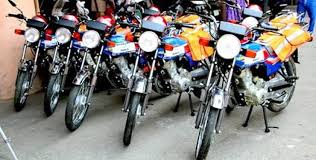 The Imo State Police Command, Owerri, has said the ban on motorcycles in the state is still in place.

“The Imo State Police Command has observed with utmost dismay the reappearance of motorcycles in Owerri Metropolis.

“It would be recalled that Imo State Government in 2011 banned the use of motorcycle within Owerri Metropolis following the involvement of some motorcycle operators in criminal activities and other vices in the capital city.

“The State Police Command wishes to inform members of the public that the ban on motorcycles in Owerri metropolis is still enforce as the law banning the use of motorcycles has not been repealed.

“Motorcycle operators and the general public are by this press release warned to desist from riding motorcycles within Owerri metropolis as any one seen doing so will be arrested and made to face the wrath of the law.