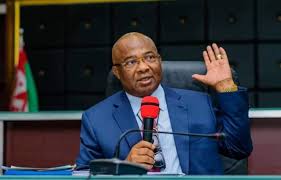 In 2015, the then opposition, All Progressive Congress, APC constituted itself into a big distraction to the then PDP government of Goodluck Jonathan. And it worked perfectly. The opposition APC succeeded to put the ruling PDP on the defence line. And they succeeded. The rest is history.

What is going in Imo State at the moment is a war of attrition between the Uzodinma administration and the opposition, PDP. It is evidently clear that Uzodinma, wants to cripple the PDP in the State. In other words, he wants to “finish off or decimate” the opposition after he successfully retrieved power from the PDP via Supreme Court judgment which removed Ihedioha from office and installed him. There is nothing wrong with it. You never give your enemy the ladder to rise. One day, he will climb the ladder and meet you, or overtake you. Overtaking is allowed, they say.

In our brand of politics, you “kill” off the opposition and allow the remnants to grope in the dark. This is exactly what Hope Uzodinma wants to achieve in Imo State. He wants no breathing space for the opposition in the state, which will make them weak and weaker for the 2024 elections. He had poached some officials of the party to his APC. There is nothing wrong with such moves. Its all politics.

The truth is, the PDP is the biggest threat to the APC in 2024 in Imo State. The party does have the tentacles to rise from the ashes. They demystified Okorocha’s plan to have a successor in 2019. There is no doubt that the PDP remains a potential threat to Governor Uzodinma and the APC in 2024. But the manner Uzodinma is going about weakening the PDP in the state, may not count in his favour. His approach may backfire. He will rather end up attracting public sympathy of the masses for the opposition.

The Ambrose Nwaogwugwu saga is the biggest mistake of the Uzodinma government. The government played into the hands of the PDP and those backing Nwaogwugwu. The PDP will continue make political capital or gain from this blunder. Already they are twisting the facts of the matter, all to their favour. They have changed the narrative, made people to believe that Nwaogwugwu, was locked up on the orders of Uzodinma, because he criticized him.

That Nwaogwugwu posted inciting statements on facebook against the Governor, which is a crime, is no longer the crux of the matter in public domain. The Uzodinma government has been portrayed by the PDP as “non tolerant” and not pro masses”

This is why it is not everything government or a ruling party reacts or heed to. You ignore some. Though Nwaogwugwu, went overboard by publishing on facebook non- existent facts about the government, getting the DSS to apprehend him, was ill advised. Those in the hinterlands will not understand the gravity of Nwaogwugwu’s offence, all they will believe, is that Uzodinma, is anti people and locked up a young boy. They will not bother to know the details. This can snowball into a big issue that will trail this administration until it leaves office.

The attendant effects of the Nwaogwugwu saga will not surface now. It will when elections come in 2024, and it will be a big negative for the government which the PDP will certainly play up and even add “salt and pepper”, to enliven their chances of winning elections.

Ikedi Ohakim never recovered from the allegation that he flogged a Reverend Father. By the time he could exonerate himself from the lie, the issue had contributed to his non- re- election, which benefited Rochas Okorocha.

Rochas Okorocha was accused of running a family government by the opposition and it was a big campaign issue which he never recovered from, which culminated in the loss of his son in law, Uche Nwosu, at the elections.

When you give the opposition a gun with a trigger, they certainly will not misfire. Uzodinma had succeeded in weakening the opposition PDP after Emeka Ihedioha fell from power. But he has re- congregated and re- energized them, through the Ambrose Nwaogwugwu saga. This can translate to public sympathy for the opposition, and a big negative for the government.