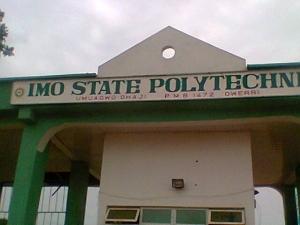 The Visitation Panel on Imo State Polytechnic, Umuagwo, has revealed some problems plaguing the citadel of learning.

Presenting its report to Governor Hope Uzodinma at the Sam Mbakwe EXCO Chambers, Government House, Owerri on Tuesday, Chairman of the Visitation Panel, Prof. Eugene Opara identified tuition fees as a major issue in the institution. He called on the Imo state government to look into their observations, particularly in the areas of payment of tuition fees by students as against the current non- payment of tuition fees.

Opara said the drop in the number of prospective students seeking admission in Imo poly can be attributed to lack of infrastructure. According to him, the report kicked against the duplication of courses at three institutions, which runs against the rules and regulations guiding the operations of higher institutions.

The rise in cultism, interference by the community in the day-to-day administration and management of the college, was fingered by the Committee as part of the problems affecting Imo Poly.

The panel called on the state government to look into the increase of subvention to the college in order to meet up with its financial needs on the grounds that the population is too low for reasonable internally generated revenue.

Prof Opara expressed regret that the last time NBTE visited the College was in 2016, which has impacted negatively in the college’s accreditation to a very unimpressive level as many courses have been non accredited for years.

Imo State Governor, Hope Uzodinma thanked members of the panel for their findings. According to him, action will be taken on their recommendations in order to lift the educational sector of the State to greater height..