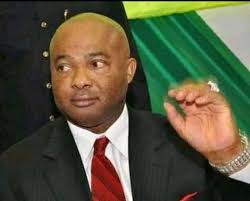 After losing two of his strategic allies, Governor Hope Uzodinma has rallied round himself with key leaders and stakeholders of the All Progressive Congress, APC in the South East.

For the first time after he was declared Governor of Imo State by the Supreme Court seven months ago, Uzodinma hosted leaders of the APC in the South East Zone in Owerri

Though the meeting centered on the repositioning the South East for 2023, analysts say it was part of plans by Uzodinma to solidify his relationship with key leaders of the APC in the region having lost two of his strategic friends who were part of his elevation as Imo Governor.

It is widely believed that former Chief of Staff to President Muhammadu Buhari, Late Abba Kyari, and former National Chairman of the All Progressive Congress, APC, Comrade Adams Oshiomole, were Uzodinma’s budding allies.

Twice, Uzodinma visited President Buhari at the Presidential Villa, Abuja, he was accompanied by the Late Abba Kyari and Adams Oshiomole respectively.

When Kyari died of complications from covid 19, Uzodinma was accused of planning to rename the Imo State University after the late Chief of Staff to the President He denied the allegation, blaming the opposition for peddling falsehood against him.

The exit of Oshiomole as APC National Chairman is also a huge political loss to Uzodinma, who is known to be a staunch ally of the former Edo State Governor.

Oshimole backed Uzodinma against then Governor of Imo State, Rochas Okorocha, during the scramble for the governorship ticket of the All Progressive Congress, APC in Imo State.

Oshiomole put his feet on the ground and insisted that Uzodinma was the elected governorship candidate of the APC in Imo State, rejecting in strong terms, the governorship bid of Okorocha’s son in law, Uche Nwosu.

With the exit of Kyari to the cold hands of death and Oshiomole out of the political stage within the APC, there are concerns that Uzodinma may have lost his political backbones within power circles in the country.

He is believed to have commenced plans to build fresh alliances in a bid consolidate his position as Governor of Imo State.

Part of the moves include his appointment as Deputy Chairman of the All Progressive Congress, APC, an assemblage of State Governors elected on the platform of the APC.

Barely seven months in office, the Imo Governor has fallen out with former Governor Rochas Okorocha and Senator Ifeanyi Araraume.

Last week, Okorocha confirmed speculations of a love lost between himself and Uzodinma, accusing the latter of instigating his ongoing probe by more than seven probe panels set up by the Imo State government.

“But only taking exception to using the probe issue to diminish or discredit the more than one thousand verifiable projects of his administration, for the eight years he was governor. Or, using the probe stuff, to blackmail him and the family or conduct needless media trial” Sam Onwuemedo, Okorocha’s media aide wrote in a statement.

Governor Uzodinmma is also currently up against political adversaries in his State who have launched fresh legal onslaught against him.

The plaintiffs asked the Court to order the Independent National Electoral Commission, INEC, to withdraw the Certificate of Return issued to Uzodinma and issue a fresh one to the candidate of the Peoples Democratic Party, PDP as the duly elected Governor of the State.

innonews - April 23, 2018 0
Allege Intimidation, Harassment of Coalition Members A coalition of stakeholders in Imo State chapter of the All Progressive Congress, APC have issued a 21...

innonews - May 26, 2017 0
Former President Goodluck Jonathan Friday lambasted Governor Nasir El Rufai of Kaduna State over the latter’s comments on his role in the sharing of...