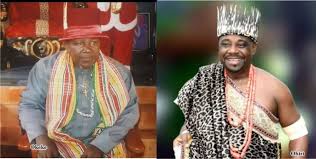 There is tension and suspense among traditional rulers in Imo State, as Governor Hope Uzodinma is expected to address Royal Fathers in the State under the auspices of Imo Traditional Rulers on Monday, July 27, 2020.

The meeting which is scheduled to hold by noon at the Secretariat parliament building of the traditional Institution along Mbari Street, Ikenegbu, Owerri is said to have been initiated by the Governor and would equally by officiated by him.

It was gathered that suspense enveloped the traditional rulers when they received their text messages, inviting them to the meeting from HRH Eze Emmanuel Okeke, the State Chairman of Community Policing and Advisory Committee, as against the usual protocol of receiving similar invitations from the office of HRM, Eze Samuel Ohiri (Eze Imo), the State Chairman of the Traditional Rulers Council.

Though the agenda of the meeting could not be ascertained as at press time, our reporter observed that most of the monarchs, are jittery because of rumours filtering in that the Governor may have convened the crucial meeting to abruptly dissolve the State Traditional Rulers Council headed by HRM Eze Samuel Ohiri, as being strongly rumoured for the past four months.

Some of the traditional rulers who spoke on condition of anonymity alleged that there is grapevine information that the Governor may dissolve the Council and in a bid to avoid administrative vacuum, may hurriedly appoint HRH Eze Emmanuel Okeke of Amaifeke Orlu, his in law, whom three weeks ago, he had appointed the Chairman of the State Committee on Community Policing and Advisory as the substantive State Chairman of the Council.

The Monarchs also speculate that Governor may have concluded plans to announce the names of the three traditional rulers he has appointed from each of the 27 LGAs.

According to them, he may direct the traditional rulers to among themselves select or nominate within one week who will be the next leader of the council and for him to subsequently rectify the appointment.

One of the traditional rulers who spoke on condition of anonymity said “On this issue,  the Governor should know that the issue of asking us to nominate or slate the Headship is unconstitutional and ultra vires in view of the fact that Imo State of Nigeria Traditional Rulers, Autonomous Communities and Allied Matters Law Number 15 of 2016(as amended) that permitted such has been repealed and abrogated by the present State Assembly while the amended Law gives the Governor the prerogative  power to nominate and appoint the State Chairman and members of the Traditional Rulers Council.

One Year After: Nigerians Remember Matriarch Of Onyeukwu Family

innonews - May 21, 2017 0
Nigerians took to the social media yesterday to remember Late Elect Lady Catherine Nnenna Onyeukwu who passed on May 20, 2016. A photo of the...

APC Members Are Fed Up With Okorocha- Ajumbe

innonews - March 22, 2018 0
A chieftain of the All Progressive Congress, APC in Imo State, Chief Orikeze Vitalis Ajumbe has said majority of members of the party have...

Imo 2019: 10 Persons Per Ward To Mobilize For Okorocha’s Successor

innonews - October 10, 2017 0
In a bid to push on with plans to install his successor in 2019 within the All Progressive Congress, Imo State Governor, Rochas Okorocha...

Imo Legislators And The Assembly Clerk, BY IKENNA SAMUELSON IWUOHA