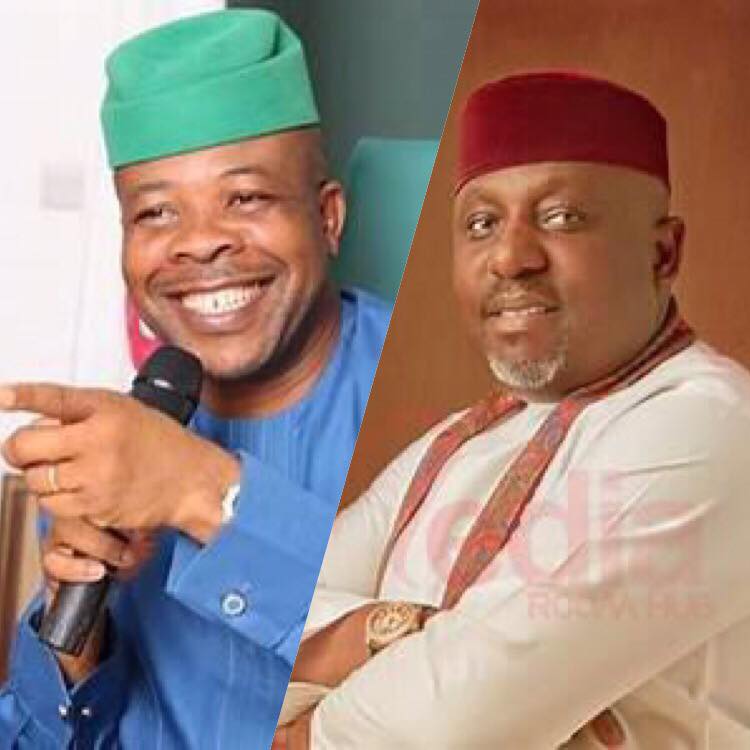 Following media reports that a political marriage between former Governors of Imo State, Rochas Okorocha and Emeka Ihedioha, may be in the offing, some political analysts contend that there is no “ray of hope for such an alliance on the basis that the duo are not politically compatible”

Speaking to INNONEWS in Owerri, a team of political analysts, who spoke on the issue said such an “alliance is unthinkable at the moment”

Mr. Fred Ukonu, Co- coordinator, Imo Youths For Political Advancement, Owerri, said despite the fact the duo are “victims of circumstances having suffered one form of political annihilation or the other, in the hands of the current Governor, Hope Uzodinmma, there is no basis for the duo to align politically.

Speculations have been rife that Okorocha, Ihedioha and possibly Senator Ifeanyi Araraume, may go into a pact or alliance based on prevailing political development in the State, which seem not be in their favour.

The trio do have political scores to settle with Governor Hope Uzodinma.

Ihedioha was removed as Governor of Imo State by the Supreme Court and he was replaced with Senator Uzodinma. Senators Okorocha and Araraume, who had celebrated Uzodinma’s victory at the Supreme Court, have been left out in the spoils of power by the latter.

A section of the media in the State had speculated that though Ihedioha is of the Peoples Democratic Party, PDP, and Okorocha, Araraume of the All Progressive Congress, APC, the trio could be of different political leanings but could be united by a common factor.

The speculation was swelled when the Reform and Advancement Party, (RAP) and it’s governorship candidate, Kingdom Okere, approached a Federal High Court, Abuja, where he instituted a lawsuit, seeking judicial interpretation in judgment of the Supreme Court of Nigeria, in appeal no: SC/1384/2019, which upheld the decision of both the Court of Appeal and the Federal High Court which ruled that Uche Nwosu, was the duly elected/nominated 2019 governorship candidate of the All Progressive Congress, APC, as well as the Action Alliance.

Okere in his prayers wants the Independent National Electoral Commission, INEC, to withdraw its certificate of Return, issued to Uzodinma and give same to Emeka Ihedioha of the PDP.

Nwosu, Okorocha’s son in law, was reported to have signaled interest to join the matter. Another report quoting an unnamed source was credited in another newspaper report, to have claimed he had no interest to join in the matter.Nwosu, according to the report, was said to have rather advised Uzodinma to unite the APC in the State.

Another analyst, Mr.Kenneth Emeghara, of the Imo Awareness Coalition, a political watchdog in Imo State, said an alliance or pact between Ihedioha and Okorocha is unrealistic for now.

“It is not possible for now. It may happen in the future depending on the political climate in the State. Okorocha and Uche Nwosu cannot align with forces outside the All Progressive Congress, APC to undermine Hope Uzodinma, who is also of the same political party. They may have political differences with Uzodinma but it is not enough for Okorocha and Nwosu to go overboard and align with a non APC member like Ihedioha of the PDP to overrun Uzodinma’s government.

“That RAP has gone to court to seek judicial interpretation of the candidature of Hope Uzodinmma as candidate of the APC, does not mean Okorocha or Uche Nwosu is on the same page with Ihedioha. Our people make a lot of conjectures, allusions and wild speculations” he said

Mr. Greg Iwueke, another analyst, said such an alliance or pact is not feasible.

“We seem to forget that Okorocha and Ihedioha are like cat and mouse that have never at anytime had anything in common politically.  It is unthinkable. If you observe carefully, the fireworks between Ihedioha and Okorocha is always fierce and intense. If you were in Imo State when Ihedioha was Governor of Imo State, you will recall that the intensity of their feud was too intense.

However, Mr. Kenneth Ufomba differed saying in “Nigeria’s brand of politics, anything is possible. Politicians in this country are not ideologically propelled.

Ufomba said “That Ihedioha and Okorocha exchanged verbal words in the past does not mean they cannot be re united for other political purposes. Could you believe that Okorocha and Hope Uzodinma can sit together after the latter was pronounced Imo State Governor after the duo had been at daggers drawn during the scramble for the APC Imo governorship ticket

Recall that Former Governor Emeka Ihedioha had set up several probe panels to probe the out-gone administration of Rochas Okorocha. Mind blowing revelations have been made at the panels.

innonews - August 11, 2017 0
The silence of Northern leaders over hate songs against Igbos circulating in the Northern part of the country is given Ohaneze Ndi Igbo serious...

innonews - July 21, 2018 0
More than 100 Nigerians who got stranded in Russia have returned to the country. The Nigerians left the country for Russia for the World Cup...