Home Sport After Thrashed By Bayern, Barcelona Puts Up Players For Sale 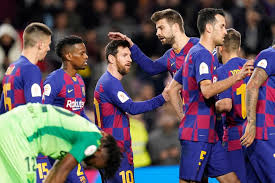 Barcelona is planning a major overhaul of its squad following their 8-2 thrashing by Bayern Munich in the quarter finals of the Champions league.

Club President, Josep Maria Bartomeu is said to have concluded plans to refresh the aging club totally and has put every senior player up for sale except four: Marc-Andre Ter Stegen, Clement Lenglet, Frankie De Jong and Lionel Messi.

Bartomeu also wants to relieve Barcelona coach, Quique Setien, of his duties immediately with former Tottenham Hotspur manager Mauricio Pochettino the favourite to replace him, though the likes of Max Allegri and Ronald Koeman are also in the frame.

Barcelona has been looking for buyers for the likes of Ivan Rakitic, Arturo Vidal, Samuel Umtiti and Rafinha for some time, though now Bartomeu has added some “untouchables” to the list of players he is prepared to sell.

Ousmane Dembele, Antoine Griezmann, Jordi Alba, Sergio Busquets, Luis Suarez and Gerard Pique will also be sold if any reasonable offers are made.

innonews - March 27, 2018 0
The All Progressive Congress National Working Committee, NWC led by its national chairman, John Odigie Oyegun has maintained that extension of the National Working...

innonews - May 14, 2018 0
Members of the Imo State House of Assembly have rejected the ongoing Local Government congresses of the All Progressive Congress, APC in the State. Speaker...

Nwulu Speaks Again, Tells Gov Uzodinma What To Do With Ihedioha’s...

innonews - January 18, 2020 0
Imo State Governor, Hope Uzodinma, has been advised to sustain some of the laudable policies of the past administration of former Governor Emeka...