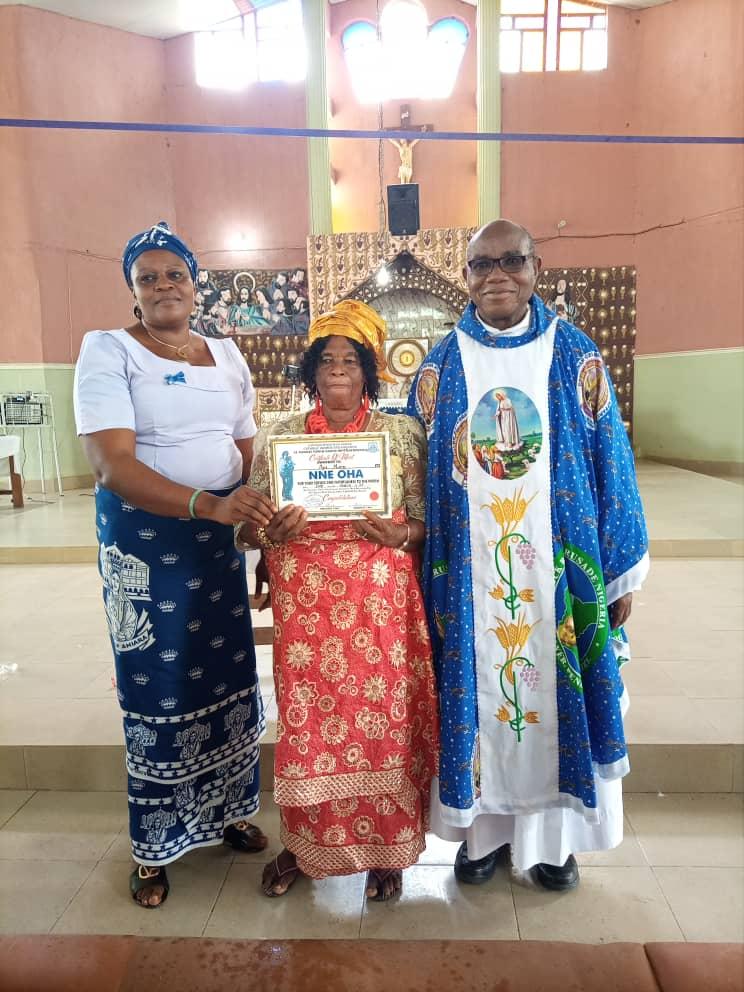 The sleepy town of Ogbor, Ihitteafor-ukwu Ahiazu Mbaise and its Catholic Community in particular witnessed an influx of the cremes l”creme of personalities and an unprecedented fanfares and glamour over the weekend as Imo Journalist’s Mother in-law, Ezinne Ada Mary Ogu “America Nwanyi” was conferred with “Nne-oha” by the Catholic Women Organization,

Conferring the foremost Nne-oha title on the Ezinne Ogu, both the Parish Priest, Gerald Anyanwu, the leadership of the Catholic Women Organization, of St Charles Catholic Parish, Ogbor-Owere, Ihitteafor-ukwu, and parishioners in their different citations, described her as the perfect definition of a devoted and faithful christian; whose kindness, generosity and love towards humanity is second to none, therefore submitted the honour is well deserved..

Responding on behalf of the family, the first son, Mr Isaac Ogu, the first daughter, Mrs Ann Eluchie, on behalf of in-laws , Mr Victor Mmadumere and on behalf of the grandchildren, Barr Ihezuo Eluchie thanked the Catholic Community for being critical, constructive, fair and transparent in their choice of finding their mother worthy of the foremost Nne-oha title in the history of the Catholic Church. They revealed that their mother, Mary Ogu is a dream of every christian home

It will be recalled that at 85, America Nwanyi has received the Ezinne title and the marriage golden jubilee medal from the church previously.