Home Politics Madumere, Okorocha Rift Get Messier, Gang Up On Ex Gov In... 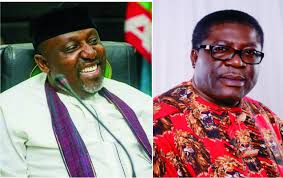 The heat is on, on former Governor Rochas Okorocha of Imo State, as Imo APC stakeholders led by Okorocha’s former Deputy, Prince Eze Madumere, continue to fire salvos at him.

The Imo APC stakeholders had last week passed a vote of confidence on Governor Hope Uzodinma, a move which had sparked off altercations between Okorocha and his former ally.

Analysts contend that the Vote of Confidence passed on the Governor by the Madumere led Imo APC stakeholders, further consolidates Governor Hope Uzodinma’s firmer grip on Imo APC and gives him the edge in the fierce scramble for the soul of the party in the State with Okorocha.

Okorocha is known to be backing a faction of the party led by Daniel Madueke against the State caretaker committee led by Marcelinus Nlemigbo endorsed by the Governor.

Madumere had faced fireworks from Okorocha’s camp last week as media handlers of the former Governor, took a swipe at Madumere, lambasting the former Deputy Governor for forcefully trying to impose himself as a leader in Imo APC and on Governor Uzodinma.

According to a statement by Sam Onwuemedo, media adviser to the former Governor Senator, he said Madumere was an ingrate.

“If Madumere could take up arms against him (Okorocha), then he (Madumere) can attack God” he said

Okorocha advised Governor Hope Uzodinma not to encourage ingratitude, recalling that he “fed him (Madumere) fat and lavishly. The man should be told to bear fruits worthy of repentance.

“For most people, the story of Prince Madumere in public life or in politics began with Okorocha and has also ended with Okorocha, because nobody, as we speak, would support his level of ingratitude” part of Mr. Onwuemedo’s statement stated

Madumere, Sunday, fired back at his former boss in a statement, by his media adviser, Uche Onwuchekwa, where he took Okorocha to the cleaners, in what could be described as further opening of can of worms flowing from a sour political relationship between the two former political allies.

Madumere, who was one time Chief of Staff to Okorocha when the latter was Governor of Imo State, said “Okorocha has no business being in politics. He is no different from a hush-puppy whose stock in trade is always seeking opportunity to get the better of every folk who has any dealings with him”

The former Deputy Governor said Okorocha’s definition of politics means “an act of deception, use and dump, blackmail, forceful take -over of people’s land, appropriating people’s salaries and pensions, using the name of God in vain, greed, and hate among other negative characters”

Madumere stated that he decided to lead the APC stakeholders to support Uzodinma to give him “the needed nerve to do whatever it takes to retrieve huge assets of the State fastened in Okorocha’s belly. It is a right step in the right direction, even if it means performing a laser surgery to hit that goal.