Home Viewpoint Nigerian President Of Igbo Extraction In 2023: Which Way Forward. BY... 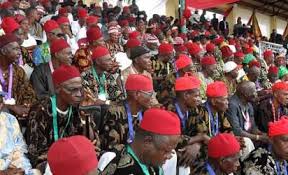 Whether one is Igbo, Hausa, Yoruba, Igala, Fulani, etc., Nigeria is One. And as a matter of fact, every major part of the country has had its bite of Nigeria Presidency except the South-East. This makes a lot of people ask: Is South-East not part of Nigeria? If South-East is really a major part of Nigeria, we think 2023 is the right time for Nigerians to produce a competent President of Igbo extraction. But major questions the Igbos really need to ask themselves include: How many major political parties in Nigeria really have stronghold in South-East? Which political party really has strong control of Igbo nation? If Igbos have not ask themselves these questions, it therefore means they will continue failing political calculation.

When someone from the North really wants to contest for Presidency, he does well to get majority support of his people and they align with either part of the Southern Nigeria for total victory. This is applicable to the South-West as they do not fail to align with the North. This is what we call accurate political calculation, which never fails to produce victory at the end. Who are the Igbos aligning with at the moment for 2023 Presidency? Can any Igbo man truly get majority of support from his people without his own selfish and greedy brothers working against him?

Fortunately, South-South has also had a bite of the Presidency. Therefore, I sincerely believe 2023 is the right time for Nigerians to produce a competent President of Igbo extraction. But it is only left for the good people of South-East to put their house in order for the way forward. No particular political party totally has stronghold in South-East at the moment, and Ndi Igbo find it very difficult to unanimously project a competent Candidate without having selfish betrayers who do not fail to backbite their own. This as a matter of fact, has caused Ndi Igbo more harm than good in Nigeria politics.

Unlike an average politician from the North or South-West, an Igbo politician or political supporter is always ready to disown his son, wife, brother or sister just because he or she does not support same political party with him. While in other Zones, South-West especially, one can see a family where the father is in different political party with his wife and son. Yet, they eat from same pot and continue to live in peace and harmony, hoping that whichever way at the end of every election, the entire family must enjoy. It is quite unfortunate that majority of Igbo politicians and political supporters see those in other political parties as enemies, instead of just opposition. They do not even see anything good in the other man from another political party. While some of those from the North do not bother much on which political party is in government. They always believe they are One come what may.

As the good people of South-East call for a Nigerian President of Igbo extraction come 2023, have they truly done political calculation on which part of the country to align with? Are the Igbos ready to unanimously provide a few competent Candidates with capacity under the major political parties in Nigeria? I repeat myself, before Ndi Igbo can produce a President, they should first go home to put their house in order. Can the Igbos truly speak in one voice? Believe it or not, Ndi Igbo cannot produce a Nigerian President if they do not stop backbiting themselves! Why are the Igbos more enemies to themselves?

Even as some reasonable and sincere Nigerians from the North and South-West encourage for a Nigerian President of Igbo extraction come 2023, a few selfish, myopic, greedy, desperate and wicked Igbo politicians still say they do not support zoning. Unu ahulanu ishi okwu anyi? These are incompetent Igbo politicians who are not interested to deliver good governance or do well for the growth and development of Igbo nation. They are only after promoting and funding outsiders while their own goes down. It is quite unfortunate! For Igbo nation to really grow and develop, everyone needs to think more of home than always looking outside…

Therefore, I encourage Ndi Igbo to be more united than backbiting and betraying one another for selfish interest. Why do some Igbos prefer to work with or help outsiders than their own brothers/sisters? Some even go extent of denying their Igbo origin just for selfish interest. May God deliver every selfish, desperate, myopic and greedy Igbo politician who finds it difficult to believe or support anything good concerning Igbo nation.

For equity, fairness and justice, there should be a Nigerian President of Igbo extraction come 2023. Anyone thinking contrary to that, does it out of selfish interest and wickedness.