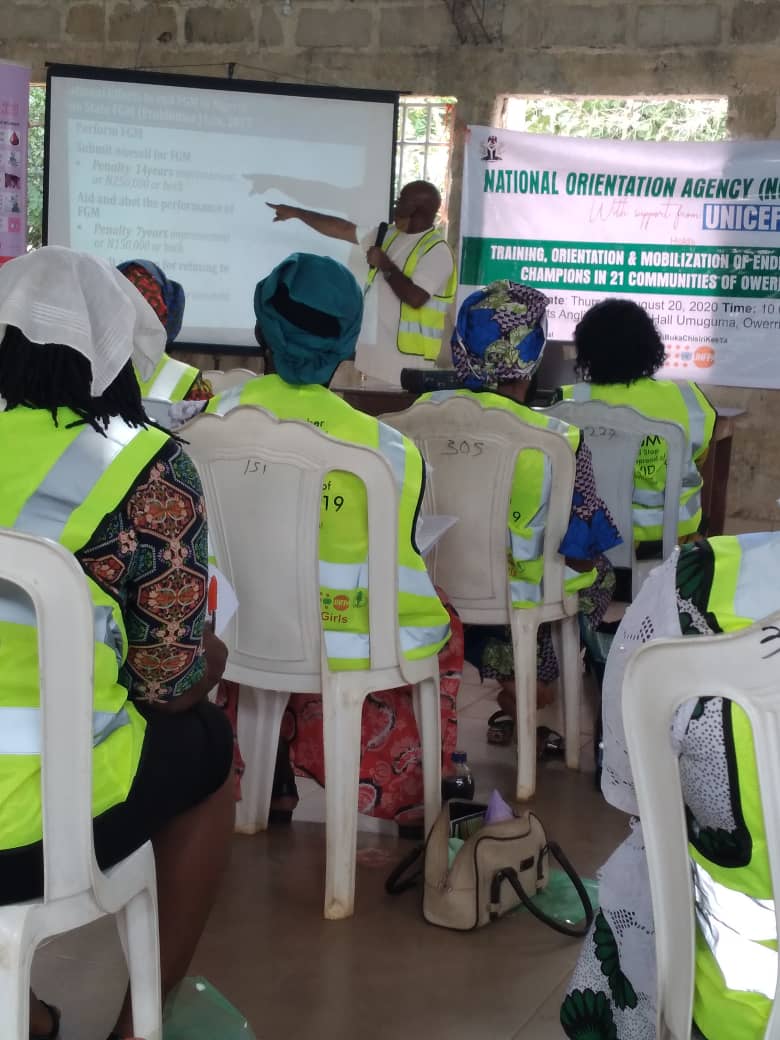 Some women groups in Owerri West and Ehime Mbano Local Government areas of Imo State have lauded UNICEF and the National Orientation Agency (NOA) for their concerted efforts to end Female Genital Mutilation (FGM) in the state.

The women gave the commendation at a one-day “Training, Orientation and Mobilisation of ENDFGM Community Champions”, held at All Saints Anglican Church, Umuguma in Owerri West and Ehime Mbano Local Government áreas on Saturday.

Our correspondent reports that the two local government areas are made up of 52 communities with Owerri West having 21 communities, while Ehime Mbano has 31 communities.

The women said it was necessary that old cultural and traditional practices with pains and disadvantages against women be dealt away within Imo communities.

According to them, many people have been misled, put in danger or made to die as a result of ignorance and petty belief about cultural practices such as FGM.

The women commended NOA and UNICEF for their training programmes that created awareness on the implications, laws and subsequent consequences of FGM and other harmful cultural practices on the girl-child and women.

Mrs Chinyere Ejiogu from Orogwe in Owerri West Local Government and Chair Lady of Umunganwoke Women Association, said that many people, especially women, had been misled due to ignorance.

She described the trainings as essential and eye openers and called on women in the communities to stop the cutting or multilation of female genitals at any point in life.

She commended UNICEF and NOA for the training programmes and promised to help to spread the message around in her community which comprised of six villages.

Mrs Chinyere Manu from Umalum-Nekede Owerri West and Secreatary General, Nekede Ancient Kingdom Women Association, expressed gratitude to UNICEF and NOA for creating awareness on FGM, saying that many women and families had suffered and were still suffering from effects of FGM.

She advised women to stop the practice of FGM, which she said, had many disadvantages and promised to help spread the message to help end FGM in her community.

Mrs Clara Nkwocha from Okolochi- Owerri West and the Acting President of Udodiri Women Group, expressed gratitude to the organisers, saying that the training had exposed the negative effects of FGM and how to championc the message to people in their communities.

She said FGM was fraught with embarrasing consequences to women and the girl-child and promised to pass the message of its abandonement through youths, women meetings and from house-to -house.

At Ehime Mbano LGA, Mrs Chinyere Ejigha from Umakagu Autonomous Community, said that people were ignorant of many things and except they were thought and informed would remain ignorant.

Ejigha, also Secretary of Umuakagu Women Group, which has six villages, expressed happinnes that the training programmes were brought to her commnunity to help save lives of girl children and women.

“The training programme is informative and educative. NOA and UNICEF is doing communities in Imo a good favour. They are putting a lot of efforts to ensure the end of FGM, and we are grateful for that.

“We were informed that FGM does not cause promiscuity in women, but improper training.

“Women should know the dangers of FGM to their girl children. The Programme has created a lot of awareness in my community. We now know better,” Ejigha said.

Mrs Maria Obioha from Umuezeala Ogwara Autonomous Community, Ehime Mbano, said she had been re-orientated on the issues of FGM and other harmful cultural practises that needed to be stopped in communities in the state.

According to her, women that had FGM performed on them experienced difficulties during child delivery unlike those who did not, while others encountered problems as a result of FGM which they carry through out life time while others die.

She pledged to carry the message to women in her community and thanked NOA and UNICEF for the message which had brought women out of darkness and discomfort into light and safety.

The state Director of NOA, Mr Vitus Ekeocha, explained the properties, dynamism, value, benefits and harmful effects of culture and tradition and factors were reinforcing the practices.

He described FGM as any partial or total removal of the external genital organ of a woman for non-medical reasons, adding that three million girls and women in Nigeria were at risk of FGM.

Ekeocha said that FGM had serious implications for sexual and reproductive health of girls and women and listed the immediate and short-term physical health complications of FGM to include intense pain, excessive bleeding and difficulties during intercourse and childbirth.

He said that the UNICEF and NOA had been engaged in many activities in Imo to end FGM.

He charged the participants to collaborate with their religious leaders to protect girls and women in the 21 communities of Owerri West and in Ehime Mbano LGAs to abandon FGM completly and other harmful traditional practices.

Earlier, the UNICEF Programme Officer, Mr Chigozie Orjiaku, said the training was to review the beneficial and harmful effects of culture and tradition and the impact of FGM on the health and well being of the people of Owerri West and Ehime Mbano.

He said it was also to increase the participants’ capacity to educate community members about the dangers of FGM, motivate them to stop the practise and support women and girls subjected to FGM or risk of FGM to get help.

He said it would equally increase the participants’ ability to advocate for the public declaration of the abandonedment of FGM and establishment of a survellance system to track compliance to commitments made during the declaration.

Chigozie said the training programme would also increase participants’ knowledge of preventing and responding to Violence Against Children (VAC) and Violence Against Women and Girls (VAWG) and COVID-19.

Speaking on “Ending Violence Against Children (VAC) and Violence Against Women and Children (VAWG) and Reducing the Spread of COVID-19 and Child Protection”, Mrs Ifeoma Dike from the Ministry of Gender Affairs and Vulnerable Group, advised participants to acknowledge the prevalence of VAC/VAWG.

She urged women to identify the various forms of violence against children and women in the community, discuss and agree on preventive and responsive measures and strategies to put in place to address and end VAWG in their communities.

innonews - January 8, 2022 0
A chieftain of theAll Progressives Congress, APC, in Imo State, Prof Orikeze Vitalis Ajumbe, has taken a swipe at some members of...

Battle For Okorocha’s Seat In 2019: Eze Madumere,Uche Nwosu In Rat...

innonews - January 26, 2018 0
The battle on who takes over from Imo State Governor, Rochas Okorocha has taken a new dimension with front runners for the seat in...

Trump To Buhari: Killing Of Christians In Nigeria Unacceptable

innonews - May 10, 2020 0
BY DAVID UKA, ABAKILIKI The Commissioner for local Government and Permanent Secretary in the Ministry, have been directed by...