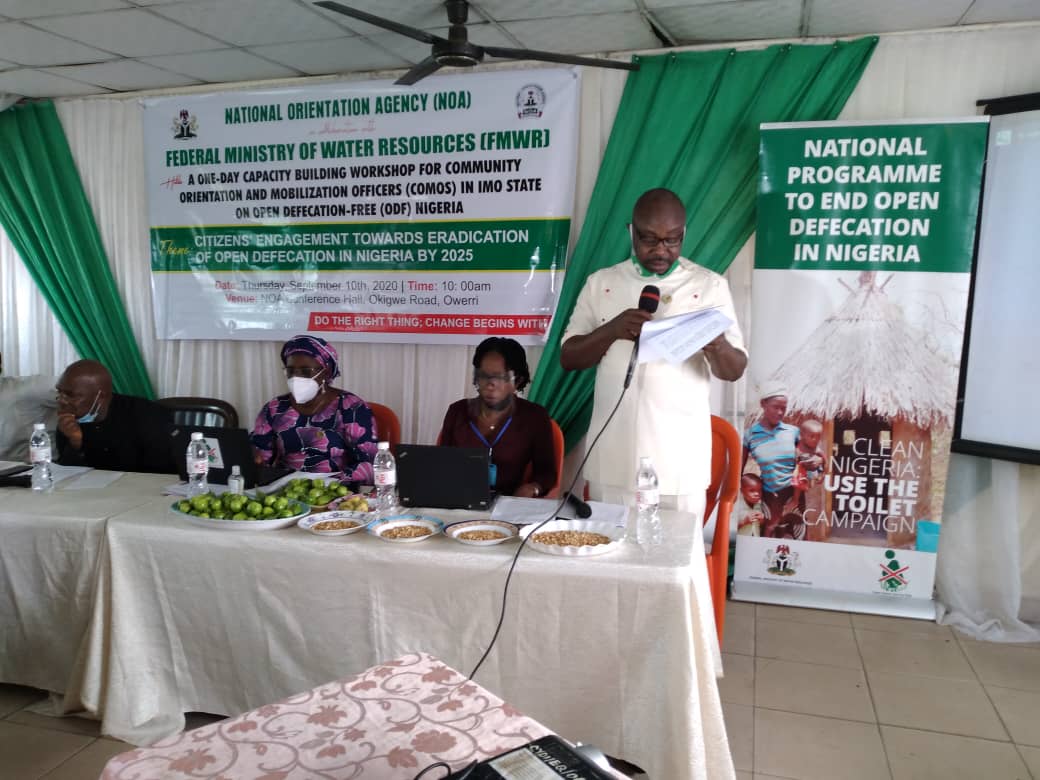 The National Orientation Agency (NOA) says it is building the capacity of its Community Orientation and Mobilisation Officers (COMOS) to win the war against open defecation in Imo.

The State Director of NOA, Mr Vitus Ekeocha, said this in Owerri on Thursday at a one-day capacity building workshop organised by NOA in collaboration with the Federal Ministry of Water Resources (FMWR) for Community Orientation and Mobilisation Officers (COMOCS) in 27 local government areas in Imo.

Our correspondent reports that the workshop had its theme as “Citizen’s Engagement Towards Eradication of Open Defecation in Nigeria by 2025.”

Vitus described open defecation as a human practice of defecating outside rather than into a toilet as a result of lack of readily accessible toilet or as a traditional/cultural practice.

He said that the health implication of open defecation, especially to children, was reason President Muhammadu Buhari signed an Executive Order 009 into Law on Nov. 20, 2019.

According to him, the Order is aimed at achieving Open Defecation Free (ODF) Nigeria by 2025, five years less than the deadline/target year set by the United Nations Sustainable Development Goals.

Vitus said the Order, amongst others, also advised the national and state Assemblies to enact appropriate laws, sanctions and penalties for offenders.

“The Federal Ministry of Water Resources which is to implement this order has chosen NOA to handle the media and community sensitisation campaigns.

“This is in line with the mandate of mobilising support of citizens towards imbibing government programmes, activities and policies to enable them understand them.

“As part of this effort to drive home the President’s mandate, the agency and the Federal Ministry of Water Resources chose Imo State as one of the states to launch the campaign.

“The first in a series of activities to achieve the objectives of the campaign is to build the capacity of the COMOs who would drive the sentisation campaign in communities on the need to abandon the practice of Open defecation and make their communities ODF free,” he said.

The Minster of Water Resources, Suleiman Adamu, said that the national sensitization campaign programme was being jointly implemented by the Federal Ministry of Water Resources and the National Orientation Agency on the “Clean Nigeria: Use the Toilet Campaign” in pursuance of the drive to end the practice of open decation in Nigeria by 2025.

Adamu, who was represented by Mrs Chisoma Opara, the Acting National Coordinator, Clean Nigeria-Use the Toilet”, said that the national programme to end open defecation in Nigeria campaign was approved by the Federal Executive Council (FEC) in May 2019.

He said the campaign was initiated to address the unfortunate position which Nigeria found herself as the country with the highest number of persons defecating in the open globally.

Quoting the 2019 Water, Sanitation and Hygiene National Outcome Routine Mapping (WASHROOM) report, Adamu said that about a quater of the population, estimated at 46 million people, were involved in the act.

Adamu said that the Sustainable Development Goal (SDG)-6 was aimed at ensuring availability and sustainable management of water and sanitation for all by 2030.

He said this included achieving access to adequate and equitable sanitation and hygiene for all and ending open defecation, paying special attention to the needs of women and girls and those in vulnerable situations.

“Besides the exposure to disease, lack of dignity and inconvenience experienced when practising open defecation due to non-availability of sanitation facilities, women and girls especially, are exposed to violence and rape as they have to go out at night to defecate in the open,” he said.

Adamu said the ministry was committed to aggressively implementing policies and strategies to ensure that the country achieved the goals.

He said that as part of efforts to address the challenges in the Water and Sanitation Hygiene (WASH) sector in Nigeria, the National WASH Action Plan was launched and state of emmergency declared the President on Nov. 8, 2018 with a strong statement to end open defecation in the country by 2025.

Mr Okechi Robinson, the Focal Person of Open Defecation Free, Nigeria, NOA, Abuja, said WHO and UNICEF Joint Monitoring Team showed that one in every four Nigerians (about 47 million persons) defecated in the open.

He said the implication of the practice and lack of sensitisation among the people posed a great health challenge to the population with attendant diseases and child mortality, especially for kids under five years.

Robinson called on participants to use the information recieved to debunk all forms of cultural practices and myth perpetuating open defecation and transfer the same commitment and passion to implement the agencies programmes during COVID-19 to enable Nigeria exit open defecation.

He said the agency would soon flag off the “Clean Nigeria” campaign in the state and renew the fight for a clean environment, saying it would be a collaborative effort.

Our correspondent reports that some of the participants, drawn from various communities in the state, expressed gratitude to the Federal Government for the programme, which they said, would equip them to tackle the issue of open defecation in communities.

Mrs Chinyere Ogwe and Mr Francis Ihem, the Chief Orientation and Mobilisation Officers NOA in Orsu and Isiala Mbano Local Governmet areas, respectively, described the sensitisation programme as a good initiative aimed at enlightening and equiping them on how to educate the rural dwellers against open defecation.

They promised, on behalf of their colleagues, to take the message home to their communities, stressing that health is a wealth.

innonews - October 17, 2021 0
The All Progressive Congress, APC, has been told that political heavyweights decamping from other political parties to it's fold are not determinant...

innonews - June 7, 2020 0
Imo COVID-19 Task Force Committee on Sunday monitored some churches in the state to ascertain level of compliance to Coronavirus protocol...