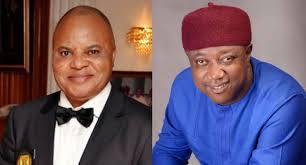 The race for All Progressive Congress, APC, Okigwe senate ticket had generated some fuss, but the shortlisting of Frank Ibezim, as candidate of the party for Okigwe senate bye election, by the independent National Electoral Commission INEC, has indeed separated the winners and losers in the entire political melee.

Former Governor of Imo State, Senator Rochas Okorocha, and his new found political ally, Senator Ifeanyi Araraume, may have temporarily lost the quest to re-posses the soul of Imo APC.They can be adjudged temporary losers in the scramble as Araraume failed to get the party’s flag for the contest scheduled to hold on October 31, 2020.

With the shortlisting of Frank Ibezim, as candidate of the APC for the polls, it is now evident that Okorocha and Araraume could be on the wrong side of the divide over who calls the shots in the APC in Imo State.

The APC ticket for Okigwe senate election had provided analysts and observers in the State the opportunity to ascertain who is really in charge of the party in Imo State.

Frank Ibezim, whose name was submitted to INEC, as candidate of the party by the APC national caretaker/extraordinary convention Committee, is strongly backed by the duo of Governor Hope Uzodinma, and Minister of State for Education, Emeka Nwajiuba.

Uzodinma and Nwajiuba are the ultimate winners or gainers in the boardroom politics that culminated in the nomination of Ibezim as candidate of the APC for Okigwe senate.

This latest development also confirms the disposition of the APC national leadership which had made it clear that it recognize the Marcel Nlemigbo led caretaker committee as the authentic leadership of Imo APC.

Senator Araraume who had lost several governorship elections in the State in the past 13 years on the platform of several political parties, had claimed he won the Primary of the APC for Okigwe senate. He had in his usual character put up a relentless battle to have his name on the ballot as candidate of the APC after he successfully divided the Primary Election Panel which came to the State to hold the exercise.

Senator Araraume is backed by the Daniel Nwafor faction of the APC in the State loyal to former Governor of Imo State, Senator Rochas Okorocha. The duo had formed a strategic alliance when Governor Uzodinma reneged on certain “agreements”after they rode with him from Abuja to Owerri to celebrate and witness his swearing in as Governor of Imo State on January 15, 2020.

With the submission of Ibezim’s name as candidate of the APC for Okigwe senate polls, it entails that the APC will go into the Okigwe senate bye election against the PDP and APGA a divided House.

Sources said Araraume may proceed to court to challenge Ibezim’s nomination by the APC, a development which will add flame to the fire of discord already rocking the APC in the State ahead of the Okigwe senate polls.

innonews - August 28, 2019 0
Bordeaux striker, Josh Maja, may get a late call up to the Super Eagles squad ahead of their friendly against Ukriane.