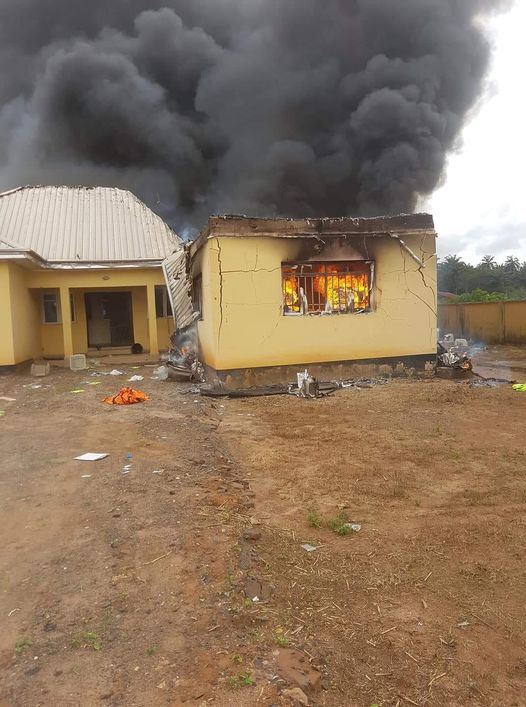 Despite the 24 hours curfew imposed in Imo State by Governor Hope Uzodinma, hoodlums have continued their nefarious acts, burning down police stations and lately, an office of the Independent National Electoral Commission, INEC.

Also, a police station in Anara in Ehime Mbano Local Government was attacked by suspected hoolums.

Recall that Mbaitoli and Orlu local government headquarters had been torched by arsonists on Thursday.

Reacting to the development, Governor Uzodinma in a broadcast, Thursday said “arsonists were on a vicious mission and that their actions have set the state backwards as it will take huge state finance to rebuild what they have destroyed”

The Imo State Police Command, Thursday announced that it will begin enforcement of the curfew in the state, just as the prices of foodstuffs continued to soar since the Endsars disturbances began in the state.

Some traders who spoke to our reporter said since the curfew was imposed it has been difficult for them to get their goods and bring them to the market to sale.

“Since the Endsars protests began together with the curfew, it has been difficult to get our goods across” said a trader at Owerri main market

However, banks, schools and government offices remained closed in the state capital as the curfew persists.

A Watchdog group, Imo Awareness Coalition, IAC has condemned in strong terms, the destruction of police stations across the state and killing of security personnel by suspected hoodlums, saying perpetrators of the act are not genuine protesters.

Spokesman of the Coalition, Fidelis Echendu said in a telephone interview that the state government should do all it can to restore calm in trouble spots in the state.

“We find it difficult to believe that those unleashing mayhem and burning police stations and an INEC office in the state are peaceful protesters.

“We believe they are enemies of the state, hoodlums who took advantage of the Endsars peaceful protests to wreck havoc across the state. This is condemnable and should be resisted” Echendu said.