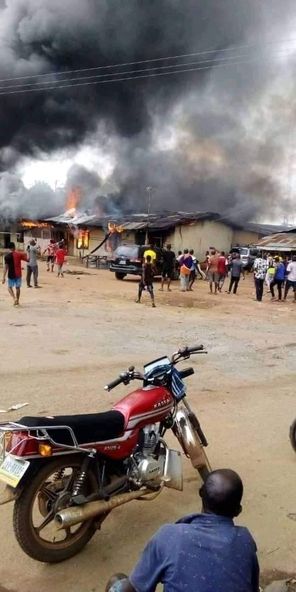 There was commotion in Orlu Local Government Area of Imo State when hoodlums attacked the council headquaters and set it on fire.

This is as youths of Nekede community in Owerri North Local Government Area, resisted attempts by suspected hoodlums to attack the Divisional Police station.

The latest attack came on the heels of local government headquarters of Mbaitoli at Nwaorieubi which was set ablaze on Wednesday.

These unsavoury developments has increased tension in the State as schools, banks and government offices remain closed in compliance with the curfew imposed on the State by Governor Hope Uzodinma.

The Imo State Police Command, Oweri also announced it’s resolve to enforce the curfew, just as the State Ministry of Transport directed all motorists to keep off the roads in compliance with the curfew.

In a statewide broadcast, Governor Uzodinma blamed arsonists for the attack, directing security agencies to enforce the curfew.

He said arsonists were on a vicious mission in the State.

He also expressed the sympathy of the State government to victims of the attacks and families bereaved, assuring that the long arm of the law will surely catch up with the perpetrators.

While appealing for calm, he assured that the State government will do everything possible to protect lives and properties.