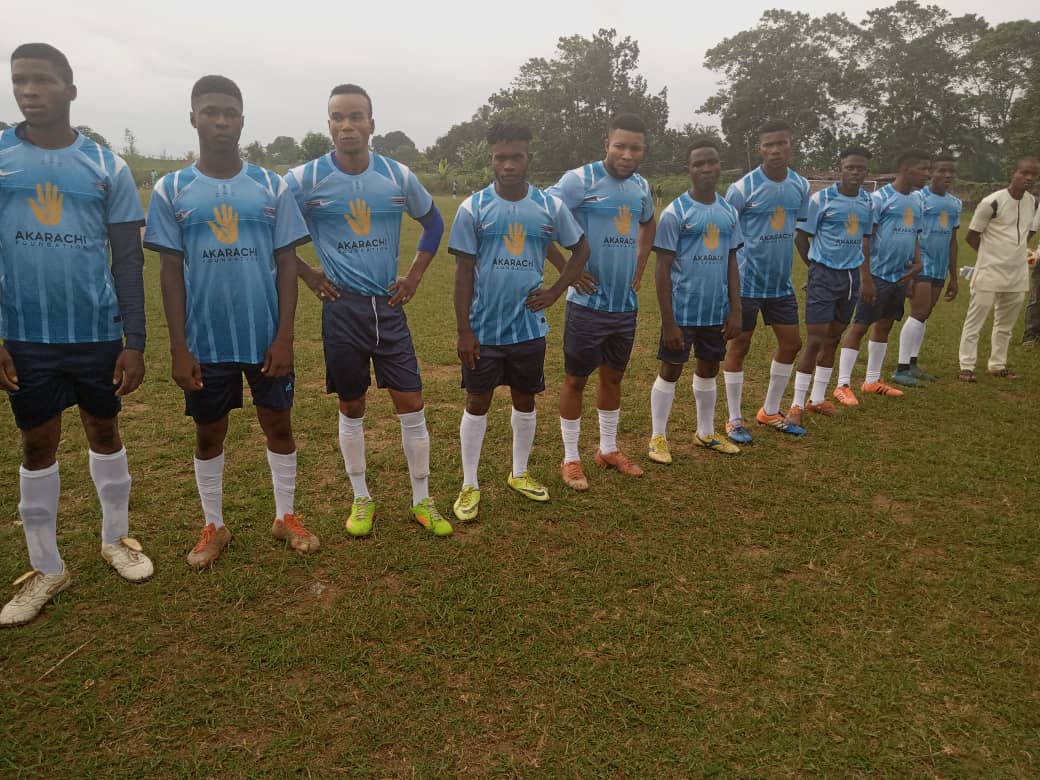 Following the row that have effected socio economic activities in Nigeria rural communities as precepitated by the antics of Corona Virus pandemic as well as the Endsarsprotest, Prince Akarachi Amadi says his mission of sponsoring the ever multi-million Naria football competition among youths of Mbaitoli/Ikeduru (Mbaike)Federal Constituency is to ignite social activities,Forester unity and discover new sporting talents for export within the area.

Amadi who and his wife – Inimfon are the Founders and President of Akarachi Foundation, said this at the playing ground of Presentation Secondary Secondary School, Ogbaku in Mbaitoli Council area of Imo State during the maiden kick off of the Non Governmental Organisation’s (NGO) sponsored 2020/2021 football competition among youths of the 24 INEC Wards that constitutes the federal constituency (Mbaike).

He commended the members of the Local Organizing Committee (LOC) for a good administrative outing assuring that his philanthropic Foundation has provided all the needed logistics for the daily competition tailored towards knock out basis as the finals will be played on Sunday 3rd December, 2021 at Iho Township Stadium in Ikeduru LGA as overall winner goes home with 1m Naira while second place gets 600k and third position benefits 400k excluding consolation prizes for best footballer of the tournament, highest goal scorer, best behaved team among litany of other prizes.

The highlight of the occasion was the kick off ceremony piloted by Prince Lemmy Akakem, an old war horse when it comes to football administration in Imo state and Nigeria at large as the youthful and sportive parents of the donor – Prince and Princess Charles Amadi (Chavon) accompanied with other dignitries that includes top government officials, politicians, business icons,captains of industries among others graced the culturally and hospitality jam-packed opening ceremony.

The opening match which lived up to its bidding was between Ogwa Ward 2 and Umunoha ward, both teams displayed robust mastery of the game that put the spectators in constant hailing, suspense and hiccups as Akarachi was almost trans fixed in admiration of the budding talents.

Surprisingly the entertaining game ended goal less draw at the end of 90 minutes of energy soaked display of skills workshop, however, because a winner must emerged based on the knock out arrangement, the teams ended up with penalty shoot out in which ever impressive Ogwa Ward 2 team won by 4 – 3 goals.

Interestingly, there’s no loser as every registered team is well kitted by Akarachi Foundation with training logistics and mouth watering participatory cash gift.

The two teams (Ogwa Ward 2 in blue while Umunoha is on sky blue jerseys) that played during the opening ceremony of Akarachi Football Competition for the 24 INEC Ward’s in Mbaitoli/Ikeduru (Mbaike) Federal Constitutency pix by Everest Ezihe.

Can Okorocha Gamble With PDP?

innonews - October 30, 2018 0
Nigerian Governors are meeting on Tuesday  to discuss the national minimum wage and come up with a position. Zamfara State Governor, Abubakar Yari revealed this ...