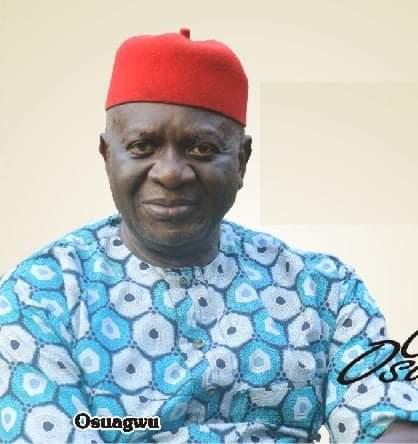 As the contest for the leadership of the apex Igbo sociocultural group, Ohanaeze Ndigbo, inches closer, various Igbo groups and prominent leaders have begun to shop for the most qualified candidate who possesses the needed character, competence and credibility to lead the Igbo Nation.

The position, which has been zoned to Imo State, is expected to be a hotly contested one, unless the stakeholders are able to find a common ground and put a consensus candidate forward.

Following a survey published recently by the Igbo Rebirth Movement (IRM), a group of young Igbo professionals in Nigeria and the Diaspora, which showed Professor Chidi Osuagwu as the most acceptable candidate for the coveted seat, many other Igbo groups have come out to endorse Osuagwu for the position.

A statement issued in Connecticut, USA, by Dr. Paul Orafu, leader of the Pan-Igbo Integrity Group, on behalf his group and eight other Diaspora associations of Ndigbo insists that, “The priority of the Igbo everywhere in the world is to think home. Our people desire to make Igboland great, safe, peaceful and prosperous. Our interest in the leadership of Ohanaeze stems from our recognition that there is need for a robust platform to bring our people together and set the agenda for our collective development. Ohanaeze is the veritable platform to make it happen.

“However, we need a leadership in Ohanaeze which we can trust; a leadership that is imbued with integrity, vision and patriotism, which will place the welfare of Ndigbo above pecuniary gains. Among all the nominees we have considered, Prof. Chidi Osuagwu stands out. We see in him a man of unblemished character, who has led an upright life and excelled in all things through the power of trust.

“A look at Igboland today reveals an entity that is lagging behind in the very basic things of life. Our land today occupies a top position in almost all indices of social misery. It is only a leadership in Ohanaeze which has integrity that can mobilize our people and begin to permanently address the problems.

“We therefore endorse Prof. Osuagwu for Ohanaeze Ndigbo Presidency, and plead with him to answer this call which Ndigbo are passionately making to him,” they implored.

Earlier, an IRM opinion poll had disclosed that, “We have painstakingly carried out this survey among the various Igbo groups and opinion leaders, and everyone keeps pointing at one thing: Ndigbo need a leader that can reunite the people. They need a leader who has the needed integrity to win the trust of everyone and reestablish a broad agenda for the development of Igboland. Our people sorely crave for a leader whose reputation, pragmatism and deep insight can reposition Ndigbo in national affairs and bring about respect to the Igbo Nation.

“He must be a person who has in all consistency and sincerity made himself available to serve the ordinary people even in a thankless capacity. A person who has demonstrated a commitment to overlook earthly possessions to stand for his people. A person who is morally untainted and intellectually astute. A person who through charisma, character and courage has earned an unprecedented following, and who is altruistic and compassionate. These should constitute the personality traits needed now. And Prof. Chidi Osuagwu represents the choice of the majority.”

innonews - December 11, 2017 0
Hajia Dr. Ramatu Tijjani, national woman leader of the All Progressive Congress, APC has kicked against the consumption of illicit drugs  in the country. She appealed to...

innonews - May 23, 2021 0
Governor Hope Uzodimma and his predecessor, Senator Rochas Okorocha, have re opened fresh altercations over the soul of the All Progressive Congress,...

innonews - June 12, 2018 0
After falling out with his boss and Imo State Governor,Rochas Okorocha over the latter’s adoption of his son in law, Uche Nwosu as his...