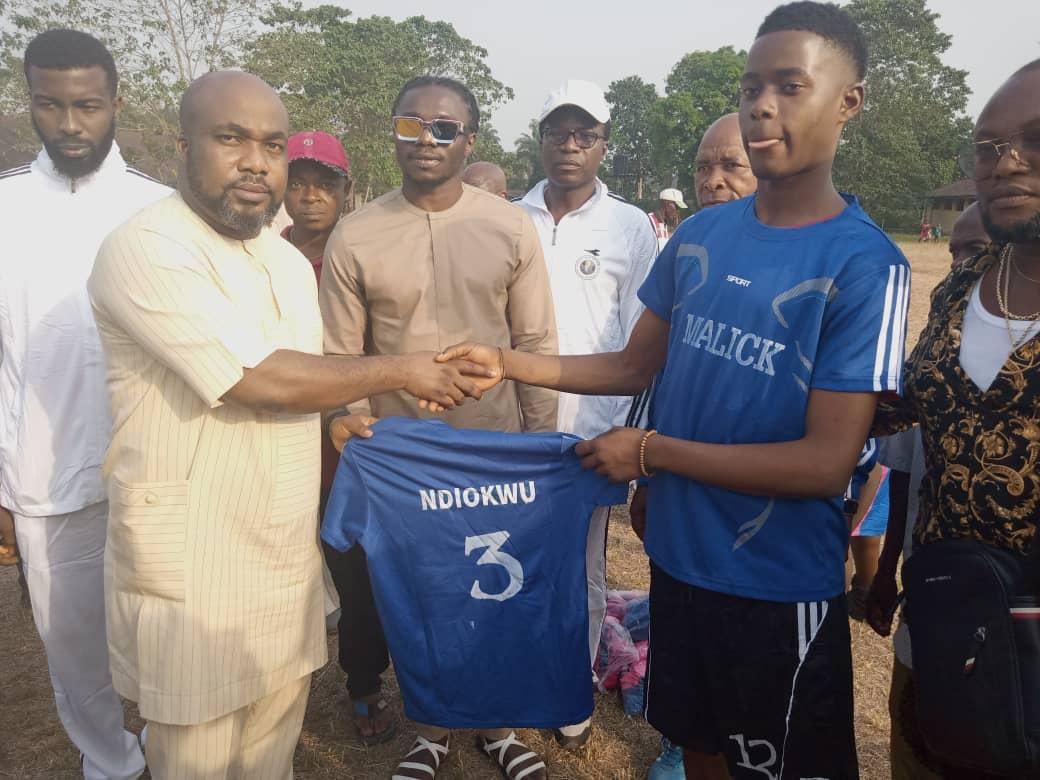 Chukwu was at the open field of Central School Umueze Ogwa, venue of the competition.  He promised the excited players and youths to link any of them who showed skills and determination to excel to his international agents and further advised the players on the need to be disciplined and to imbibe the spirit of sportsmanship in their exploits.

The International player came along with Chief Malanchy Metu, (Nkwachukwukwere Ogwa),  a business mogul based in China and the younger brother of Chief Kelechi Metu (Akurulo), the major financier of the competition, as they watched the opening match between Umuelekocha FC and Umuduruzo FC which ended in a goalless draw with memorable exhibition of skills and good football artistry.

Among dignitaries present at the kick off of the match include, HRH Eze Kenneth Akuneto ( Eze Udo 2 of Umueze/Abazu Ogwa autonomous community) and Barr. Charles Olumba, the President of Umueze community, Chief Malanchy Metu, who is also the CEO of City Cruiz Hotel, Owerri who through his Malick Foundation, donated customized sets of jerseys to each of the participating village teams.

Speaking earlier, Chief Kelechi Metu, the sponsor of the tournament enjoined the players to observe fair play noting that any of them with skills have an opportunity of playing professional football within and outside the country. Metu said that he was motivated into sponsorship of the competition, cautioned the players against in fighting and violence and also youths on the need to desist from anti social behaviours. He assured that all the participating teams will receive some cash reward.

Adding his voice, Mr. Osita Duru, the chairman of the Local Organizing Committee expressed gratitude to the sponsor and donor

Duru assured them of their resolve to have a peaceful and brotherly competition devoid of any rancour and acrimony. Among  the participating villages are Duruahazie, Amaiyi, Abazu, Umudim , Amiyi, Ihitte and Umunwachukwu.

innonews - December 13, 2019 0
Traders, shop owners, businessmen and women, have been advised to keep their surroundings clean and assist the State government to maintain cleanliness...

innonews - December 1, 2018 0
*By David Uka, Abakaliki* Director-General of the National Youth Service Corps, NYSC, Brig-Gen Suleiman Karaure has warned Corps members in the country who will be...