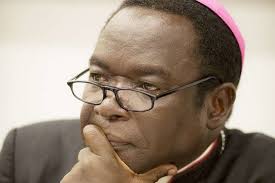 A front-line human rights activist and author, Comrade Paul Ikechukwu Njoku, has called on the Muslim Solidarity Forum to quit Boko haram and killer bandits ravaging the North and leave the Catholic Bishop of Sokoto Diocese, Matthew Kukah, whom they ordered to tender an unreserved apology to the entire Muslim Ummah over what they call “malicious comments” against Islam or leave Sokoto State.

Reacting to this quit order, Comrade Paul, noted that freedom of speech and expression are not only enshrined in the Nigerian Constitution but a guaranteed international law on human rights as ratified by the United Nations and African Union Charter.

The rights activist, added that the Buhari government and Muslim Solidarity Forum must be told that Article 18 of the Universal Declaration of Human Rights which was adopted on December 10, 1948, empowers Bishop Kukah a right to opinion on religion and significant views concerning the Buhari government.

“Under the Nigerian Constitution, every citizen has the right to move freely and reside in any part of the country without inhibition, molestation and threat to life.

“The Buhari-led government should not compel Nigerians to believe that the sole validity of the Nigerian constitution does not apply to the Sharia and Hisbah States in Northern Nigeria.

“The travesty of absolutism, injustice and ruthless intimidation against Southern and Middle Belt Nigerians by the Islamic extremist groups must be utterly resisted.

“Bishop Kukah’s parishes and cathedral in Sokoto Diocese must not be burnt down neither must he be ruthlessly slaughtered in body bags, killed or kidnapped by any Islamic extremist or radical group.

“If it were a Southern Christian group that gave such a quit order to another ethnic group against a Northern-Muslim group as the Muslim Solidarity Forum did to Bishop Kukah, funny-looking guns would have been brought out by the Nigerian partisan Secret Police against the Christian Southern group” Mr. Njoku, stated.

The excerpt of his measage read:

“Every honest Nigerian knows that there is no way any non-northern Muslim President could have done a fraction of what President Buhari has done by his nepotism and go away with it. There would have been a military coup a long time ago or we would have been at war. The President may have concluded that Christians will do nothing and will live these actions. Pastor Adesina was right to call us wailers. On the sad situation in Nigeria, the United Nations has wailed. The Pope has wailed. Cardinals, Archbishops, Bishops, Priests, Pastors have wailed. Emirs have wailed. The Sultan has wailed. The North that the President sought to privilege has become a cauldron of pain and a valley of dry bones”.

innonews - March 10, 2020 0
BY JANE UKONU Following the outrage that trailed the exclusion of the South East from Federal Government $22.7 Billion...

innonews - February 25, 2018 0
The remains of late traditional music maestro, Ichie Mezuo( aka Pericoma) will be buried on April 9, 2018.  The funeral arrangements was released by the...

innonews - February 11, 2019 0
Former United States President, Bill Clinton, has given reasons why he decided to cancel his planned visit to President Muhammadu Buhari...