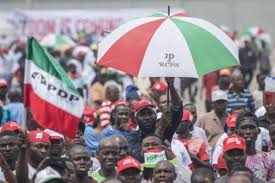 It is no longer news that the People’s Democratic Party (PDP) in Imo State was thrown into an uncontrollable crisis shortly after the 2019 general elections.

The crisis as gathered was unconnected with the way and manner some members and leaders of the party were technically sidelined in all activities of the party.

This minor disaster became a thorn in the party’s flesh, popularity, activities, programmes and most importantly, image.

Following this avoidable man-made internal rangling, a once bubbling and efficacious widely embraced political platform suddenly became the shadow of itself till the last day the peace accord was brokered.

Retrospectively, the People’s Democratic Party in Imo state began scoring political goals since 1999, when it produced Governors, Senators, House of Representatives and Assembly members with ease.

Regrettably, when greed, selfishness and ego started to overwhelm the original principles, vision and mission of the party, things began to fall apart and the center could not hold.

Today, the microscopic view of greed, dominance and arrogance have become a thing of the past courtesy of the reconciliation that ensued.

In nutshell, according to Duncan Lawandoski, “reconciliation is triggered by genuine desire for peaceful environment. It’s possible when a peace lover loves to love peace”. This is the summary of the whole scenario.

From Lawandoski’s postulation, an environment of peace is not possible when a peace lover does not sue for peace, unity and love.

The question every lover of PDP wants to know is; who actually made this reconciliation and peace possible? And who are those people that created the crisis?

However, in as much as the answer to these questions are necessary, it is now belated to start mentioning names since peace has taken place.

Notwithstanding, there is a man of peace who sees the days of trials and tribulations of the PDP as a setback, an insult and a bad omen to genuine lovers of the party.

All this while, he made it a task to let go of the humiliation and betrayals he suffered in the hands of Political friends in PDP to allow peace to reign. That person is Senator Samuel Nnaemeka Anyanwu.

Sincerely speaking, it takes a man of peace to accept reconciliation with known enemies, betrayers, saboteurs and backstabbers. It is either the victim is still in love with the subject matter or doesn’t want the platform (PDP) to die a natural death.

Senator Samuel Anyanwu should be commended for keeping aside all grievances, animosity and acrimonies against those that deliberately wronged him to accept reconciliation for the peace and unity of PDP.

Indeed, this is one of the hardest and toughest sacrifices only a good leader can offer. His behavior towards the success of PDP is evidenced on his vocal and outspokenness against the maladies of APC bad governance in Nigeria.

Senator Anyanwu had said it many times that PDP remains the only better alternative capable of guaranteeing assured security, economy, peace and unity of the country.

It is his firm belief that if everyone including the aggrieved members could humbly come back to the party, there is no way PDP will not regain power in 2023.

It is the philosophy of Senator Anyanwu to see PDP one day rescue the moribund electricity, stabilize price of petroleum product within the affordable limit of Nigerians, guarantee security of lives, properties and ensure good road networks.

These can only be achieved when all hands are on deck to bring sanity, rectitude, morality, peace, unity and success to bear.

As Senator Anyanwu has vowed to join hands with other leaders and genuine party members to raise PDP to an enviable height, there is need for anyone joining him to be real, sincere, pure and dogged.

It will amount to another infighting, ridiculous, shameful and unproductive for anyone to begin to form camp or camps in a party that just succeeded a severe surgery after same idea nearly destroyed her in the past.

This is the time to team up as a family to make the party more attractive, productive, popular and all inclusive again because tomorrow may be too late. The best time to start is now!

By so doing, we shall be expecting Imo PDP of our collective dreams!

innonews - September 12, 2020 0
Ahead of the 2023 political dispensation, Imo State born U.K based political analyst, Newton Eze, has predicted the political fate of...

innonews - February 5, 2021 0
The Archbishop of Owerri Ecclesiastical Province and Bishop, Diocese of Okigwe South, His Grace, The Most Rev Dr D.O.C Onuoha, has enjoined...