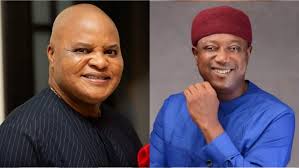 The long road to the senate for Senator Ifeanyi Araraume and Frank Ibezim may continue, as the Independent National Electoral Commission, INEC, says it is still studying conflicting judgements on Imo North Senatorial Election.

The duo have been entangled in a ding dong, resorting to legal fireworks in a bid to compel INEC to issue to them a Certificate of Return, COR

INEC had declared the All Progressive Congress, APC winner of Imo North Senatorial election held on December 5, 2020 but did not return a winner.

Last Thursday, the Federal High Court sitting in Abuja ordered INEC to issue Senator Ifeanyi Araraume with a Certificate of Return within 72 hours.

INEC National Commissioner and Chairman Information and Voter Education Committee, Festus Okoye reportedly said INEC will only do the needful after studying the multiplicity of judgements in respect of Imo North Senatorial election.

“Based on the multiplicity of judgements and Orders in the Imo North matter, the Commission will carefully study them and do the needful

“As at today there are over 13 cases either filed or decided by the various courts relating to the Imo North Senatorial bye election.

“The recent ones relate to the judgement of the Federal High Court in Abuja and the ex parte Order from State High Court in Owerri.

Okoye said the legal Department of INEC will look into the matter.

“The Commission will deliberate on the matter, take a decision and inform the public. Hence, these judgements must of necessity pass through our processes and procedures. We are not a Court of law. We do not have adjudicatory powers”

“We give effect to judgements and orders of our courts based on their tenor, context and our understanding of the judgement or orders we have been directed to give effect to” Okoye stated.

innonews - July 12, 2020 0
South East Leaders of the All Progressive Congress, APC, met in Owerri, where they unanimously stated that...

innonews - March 3, 2020 0
Minister of State for Health, Senator Olorunnimbe Mamora, has cautioned Nigerians on the use of herbal products to protect themselves from Coronavirus...