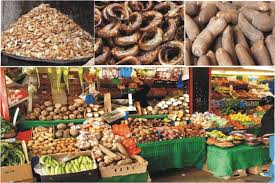 For the past one week, it has been observed that prices of foodstuff have continued to soar, and in some cases, become unavailable.

A visit by our reporter to some major markets such as Relief and Eke Ukwu in the State capital, Owerri, reveals that food items and fruits such as cucumber and carrot, have completely disappeared from the markets, thus the commodity has become scarce.

It was gathered that the strike action embarked on by the Amalgamated Union of Foodstuff and Cattle Dealers of Nigeria (AUFCDN) is hugely responsible for the food shortages.

AUFCDN had embarked on a nationwide strike last Thursday issuing a seven day ultimatum to the Federal Government to attend to their demands.

The Union is demanding from the Federal Government N475 billion compensation  for lives of members and properties lost during the Endsars Protest and the recent Shasha market crisis in Oyo State.

The Union said it demanded that roadblocks should also be dismantled as their members are being extorted.Part of the strike action includes closing of all routes between the North and South for vehicles conveying cattle and food items.

It was observed that though the Shasha market crisis in Oyo State is the cause of the seeming food blockade to the Southern part of the country, as the action is being felt in major States in the South East.

“If nothing urgent is being done to change the situation, we may have to make alternative arrangements to ensure there are food items in our markets by next week, else we may have food scarcity” a trader at Eke Ukwu market told INNONEWS.

Mrs Comfort Onyeali, an Owerri resident said ” Almost every food item from meat to tomatoes is so exorbitant to purchase. Everything seems to have gone out of reach in terms of price and I fear for the worse”

Orlu Zone And Insecurity, The Challenge Before Gov Uzodimma. BY PROF...

innonews - February 16, 2021 0
The world needs love and it’s only in love that the problem of humanity could be solved. Love is a divine principle...

innonews - February 23, 2020 0
BY: JANE UKONU There are strong indications that Governor Hope Uzodinma has shelved plans to make further appointments in...