Home HARVEST Re Examining The Leadership Process In Imo State 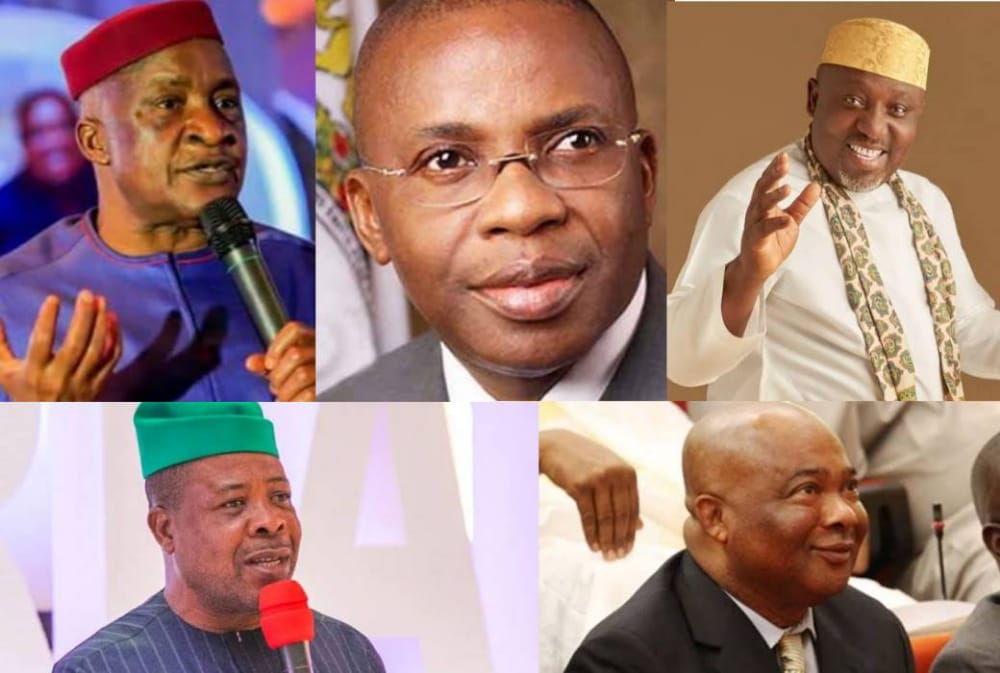 Former Presidential Adviser, Mr Reno Omokri, got me thinking last week, when he queried the leadership process in Imo State.

Against the backdrop of the arrest of former Governor of Imo State, now Senator, Rochas Okorocha, by the Economic and Financial Crimes Commission, EFCC, and allegations leveled against another former Governor of the State, Ikedi Ohakim, by one Chienye Amuchienwa over an amorous relationship that has gone sour, Omokri tweeted “One ex Governor is being prosecuted for attempted blackmail of a former lover over her nudes, his successor now arrested by the @ official EFCC for money laundering. What is wrong with the leadership process in Imo? How can Imo have Champions, yet vote in charlatans”

Was Omokri right in his assessment or was he blabbing? In other words, Omokri postulated, that Imo State has not had the best at the helm of its affairs. After Dee Sam Mbakwe and considerably, Achike Udenwa and Emeka Ihedioha, who governed for only seven months and cannot be assessed on this premise, what we have witnessed in Imo for a long period, is half baked governance.

This is evident in the fact, that there has been no significant change in Imo State since 1999 the military quit governance. The only “change” the State has witnessed is the emergence of millionaires and billionaires after holding public offices.The State has been led on the path of perdition, down the valley, with public office the most sought after, because it is the surest route to affluence and wealth in a State the citizens are despondent.

The leadership process in Imo State has long ago been dislocated. It has crumbled. What is in place, is a stage for all comers where political gymnastics are orchestrated by desperate politicians.

The leadership stage has been taken over by those who lack character, in deficit of the charisma and candour to govern.Their passport to leadership position in Imo State is a deep pocket and contacts beyond the shores of the State which aids them influence the outcome of elections. They are urged on by an army of jobless youths, hangers on and political layabouts.

The power of the ballot is gradually going extinct in Imo State. The people are losing fate in the electoral process, because the vote seems not to count anymore. Those who now ascend to power in Imo are the political fittest and not necessarily the best.

After the exit of the RBK Okafors, K. O Mbadiwes, lately the Nzeribes and Iwuanyanwus from the leadership and political circles of Imo State, political buccaneers have taken over. They constitute the new band of leaders in the State. The few credible ones are in short supply. They are overwhelmed by a leadership process which elevates mediocrity; and meritocracy consigned to the trash bin.

Majority of them posses the mentality of do or die in politics. And because no other sector thrives in Imo State aside politics, they have invaded the ‘sector’, making it become the only booming “industry”.

Across the South East zone, Imo state is the only state, governors have been elected twice via supplementary elections, and a sitting governor removed from office and replaced with another by the Court. A Senator in the State also emerged, not from the ballot but through the Court.The consequences of this dangerous trend in the political lexicon of the State, is gradual loss of confidence in the power of the ballot.

None of our State Governors from 1999 passed through the crucible of leadership or underwent political tutelage from past leaders of note. I stand to be contradicted.This has manifested in the quality of governance we have seen in the State over the years.

We have observed a pattern where some State Governors in Nigeria, who have performed creditably in office are products of political nurturing and mentoring by great political leaders.

Former Governor of Lagos State, Babatunde Fashola, is a follower of the ideals of Late Lateef Jakande. Governor Kayode Fayemi of Ekiti State is a great admirer of Late Chief Obafemi Awolowo. And we can attest that these States have become icons of development and good governance.

The quality of leadership in Imo State since 1999 has not been too impressive, because the leadership process has given way to a queer and rigmarole process, which only encourage the fittest and to the most politically rugged, to climb the ladder of leadership.

This is the reason the State is yet to record any significant leap in economic growth and development. It has remained the unemployment capital of Nigeria for a long period. The gap between the rich and the poor has also continued to widen. And the backbone of the State- the youths- are the worst hit, with no jobs and are enveloped by hopelessness.

Businesses have not thrived in Imo State in the past 20 years. The Ease of Doing business has become horrendous. And the economy has remained stagnant. Jobs have remained elusive as infrastructure weaken. In the past eight years, there was dearth of infrastructure in the State. Governance was reduced to a plaything and a comic show never seen anywhere across the globe.
It is not late for this sorry trend to change only if those who govern, will give the State the good governance we crave for.

The Hope Uzodimma administration has the unique opportunity to change the narrative. We can still get to Eldorado. Its not late to get there.

“This is evident in the fact, that there has been no significant change in Imo State since 1999 the military quit governance. The only “change” the State has witnessed is the emergence of millionaires and billionaires after holding public Offices.The State has been led on the path of perdition, down the valley, with public office the most sought after, because it is the surest route to affluence and wealth in a State the citizens are despondent”

Gov.Tambuwal In South East For Consultations

innonews - April 16, 2020 0
Allegations and counter allegations of how N19.63 billion naria was used to procure earth moving equipment by the past administration of...