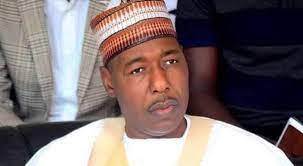 The Nigeria Union of Journalists(NUJ) Imo State Council  has nominated  the Borno State Governor Prof. Babagana Zulum for a “Distinguished Leadership Award” in its forthcoming Imo NUJ  summit scheduled for May 25.

The award is in recognition of his selfless and people-driven projects and  leadership qualities.

The Chairman of the planning Commiittee for the Summit and vice-Chairman of NUJ Imo Council, Mr Emma Odibo, who represented the Council Chairman Chief Chris Akaraonye  made this known when the governor’s special aides  visited the State Council to collect their principal’s nomination  letter.

Speaking with journalists, the Senior Special Adviser to  Gov. Zulum on Media,  Baba Sheikh  Haruna said the governor was pleased with the news of the nomination  and the honour to be bestowed on him by the Imo Council of NUJ. Haruna,  former NUJ Chairman Borno State, described the award as a handshake across the Niger and a rare opportunity coming from people of the South East.

He said that though Borno State had not find it easy with the issue of insecurity and banditry, yet the governor had not been  deterred in his selfless service to his people.

“Though we’ve been experiencing a lot of challenges, we are working hard to change the narrative in Borno State.
“As I am talking to you, a lot of transformation is taking  place despite the crises. This has been overshadowed by what’s currently happening. But I assure you that it is only a matter of time we will have these problems behind us,” Haruna said.

He said that Zulum is currently grappling with problem of resettling the persons displaced by the insurgents in the state and expressed optimism that peace would return to the state.

Also speaking, the Special Adviser(SA) to Zulum on Community Relations, Mr Kestar Ogualili described Prof. Zulum as a detribalised Nigerian who works and accomodates other tribes in his cabinet.

Ogualili said he had been a member of the governor’s cabinet since the beginning of his administration even as an Igbo Man.
He said that the governor had empowered not only the Igbo community in Borno but other ethnic groups in several ways even sponsoring Christians to Jerusalem pilgrimage.

He further said that the state’s one billion naira entrepreneurship fund benefited non indigenes especially the Igbos.
Ogualili described Borno as second home to them,  adding that the Igbo community have enjoyed immense benefit from Zulum right from his days as the Rector of Ramat Polytechnic.

“We the Igbo community in Borno thought it heartwarming for you to have remembered our principal.
“We are at home in Borno. Zulum does not call us non-indigenes.  We live in Borno and that’s where we train our children. He is a true bridge builder and a certified nationalist.

“The Igbos are doing well in Borno because they are not being marginalized. We have benefited from Borno entrepreneurship programme and during Christmas, he provided vehicles for us to go home and also parcel for widows in our communities.
“There are no discrimination in admissions in Borno State University. Equal chance for everyone and no discriminatory fees,” Ogualili said.

He assured the NUJ that his principal would be glad to be physically present at the summit and wished the union a successful planning and execution.

Earlier, the NUJ Vice-Chairman, Odibo, while handing over the letter, said the council was proud to be associated with Zulum’s achievements in Borno, especially the fight against insurgency.

He said the Borno state governor had vowed to remain focused and unwavered in his mission to move the state forward despite the lingering disturbing insurgency in the North East region of the country.
He said Zulum administration also pledged to continue to assist security agencies in the onslaught against the perpetrators of crime in the state, while efforts would be intensified to cushion the plight of Internally Displaced Persons (IDPS) in their various camps with necessary palliatives.
Odibo, onbehalf of the Chairman of the union Comrade Chris Akaraonye and other members  thanked the visitors for finding time to physically recieve the nomination letter  of their principal and promised them that the summit would be worthwhile.