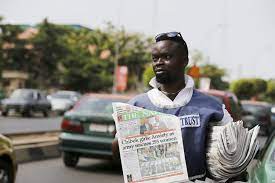 The Nigeria Union of Journalists, NUJ, Imo State union and  Senator Samuel Anyanwu, Tuesday, condemned the arrest of some newspaper vendors in Owerri by security operatives.

The NUJ in a statement signed by Chris Akaraonye and Juliet Dim, Chairman and Secretary of the union respectively condemned “the gestapo style of invasion and arrest of newspaper vendors and distributors in Owerri last  Monday.

Part of the statement read:

“According to investigations by Imo NUJ, policemen from the Inspector General of Police, Intelligence Response Team (IRT) swooped on the newspaper vendors and distributors at Rotibi Street, Owerri, where newspapers and magazines are usually distributed, and arrested no fewer than seven of the vendors.

“Efforts by the leadership of NUJ in Imo to find out what happened to the arrested vendors revealed that they were taken to the Imo Police Command Headquarters, Owerri.

“The investigation by the Union also revealed that the State Police Command and the DSS in State had no knowledge of the embarrassing invasion and arrest of the people carrying out their lawful business to eke out a living.

“Imo NUJ states that the invasion and subsequent arrest of the newspaper vendors was more embarrassing as the Imo Police Command and DSS were not even aware of the plan until it was fully executed.

“That we equally consider it an insult that the Imo State Governor as the Chief Security Officer of the State, and his government, were also not informed about the planned invasion and arrest of newspaper vendors.

“That we demand that the presidency and police authorities should investigate the embarrassing invasion and arrest of newspaper vendors by the IGP’s IRT squad.

“That this type of invasion and arrest raised further the tension in Imo over the activities of unknown gunmen as there were reported panic around Douglas area of Owerri by people going about their businesses.

“The NUJ wishes to advise that  the extant laws of the nation have enough and sufficient laws to take care of any infraction with regards to publications that are likely to breach public peace and security.

“Such perceived infractions should equally be properly handled by courts of competent jurisdiction and not resorting to a gestapo style of invasion and arrest as if the nation is under a military junta.

“That the leadership of the NUJ in collaboration with the State Commissioner for Information, the Police, DSS and the  leadership of Newspaper Publishers  have  secured the release of those arrested.

“The NUJ will never support anything that will legally undermine the peace and security of Nigerians and the Nigerian nation.

“The Imo NUJ calls on journalists, media workers and ancillary service providers to remain calm and go about their lawful duties as the leadership of the union is working with other stakeholders and  security agencies to resolve the issue and get to the root of the matter.

“The NUJ wishes to commend the efforts of the Commissioner of Information, Mr Declan Emelumba, Commissioner of Police, Director, DSS and leadership of Imo Newspaper Publishers Association (INPA) for their efforts and cooperation to secure the release of the arrested vendors.

Senator Anyawnu in a statement by his Media Adviser, Ikenna Onuoha, said  “democracy become useless when the press of press is hampered and threanted by agents of governments who are expected to protect”

“Press freedom entails that every citizen is at liberty to express their opinion through oral or written channels, it impedes constitutional provisions when the government begins to intimidate, harass or manhandle those exercising their rights” the statement read