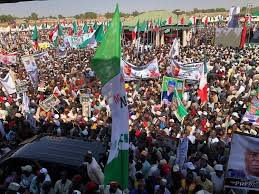 The Peoples Democratic Party, PDP, in Imo State, has appealed to Imo people, particularly the youth, to exercise restraint in the face of “increasing spate of military show of force in the State, which manifests in the form of incessant gunshots in civilian residential areas, indiscriminate positioning and patrolling of Armoured Personnel Carrier (APC) vehicles, arrests and detention of Imo people on trumped up allegations, and actual extra judicial killing of innocent citizens in cold blood”

In a statement by the Publicity Secretary of the party, Ogu Bundu Nwadike, the party noted that “sadly the tension in the State is becoming very provocative to citizens, particularly the youths, who are the greatest victims of the increasing militarization of the State that was once rated the most peaceful State in Nigeria.

“A great deal of anger and frustration are being whipped up which could worsen the already bad situation.

“Under the circumstance, the Party appeals to Imo people, particularly the youth, to exercise more patience and remain calm, peace loving and law abiding, while the
governor is urged to urgently take steps to demilitarize the State.

“The party cautions Imo youths against engaging the military and security operatives in any exchanges that are capable of exposing them to avoidable danger and harm.

The PDP called on Governor Hope Uzodimma “to ensure that the Security Agencies operating in Imo State are professional, and in tandem with democratic tenets in discharge of their duties. Imo is not at war.

The party called “on Traditional Rulers, the Clergy, Imo leaders and all men of goodwill in Imo State to speak up now before it is too late”

Cultism: One Hacked To Death In Ebonyi Community

innonews - October 11, 2021 0
A newly elected executive of the National PDP Professional and Business group, NPPBG, has emerged. The election to elect...

Okorocha: How I Confronted Iwuanyanwu, Ihedioha, Nzeribe, Others To Win 2015...

innonews - April 14, 2018 1
Imo State Governor,Rochas Okorocha has revealed how he confronted big names in Imo politics and went ahead to win the 2015 Imo governorship election. “In...