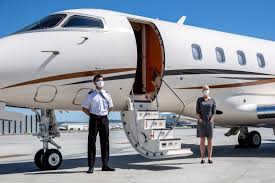 It costs between $4,600 to $6,000 and in some cases, more wads of dollars, to hire a private jet from private jet charter companies for an hour, depending on the location in Nigeria.

This newspaper learnt that some charter companies may charge between $2,000 and $4,000 per flying hour for a turboprop or smaller jet plane.

The financial implications of hiring such jets lies on the state government.

Aside cost of hiring a private jet, it incurs extra cost if such jets are hired for more than an hour, a day or weeks.

The cost further varies depending on the type of jet being hired.

State governors, some clergymen who decide to own such private jets pay as much as N1.5 to N15 billion naira.

The use of private jets by some State governors in Nigeria has been widely frowned at by majority of citizens, who see it waste of funds at a period the economy is in distress.

Most States in Nigeria are grappling with the challenge of non payment of workers salaries and pensions of pensioners.

It is therefore viewed as unfair on the part of State Governors to use tax payers’ money to hire, use or purchase private jets.

Mr. Anayo Godson, a public policy analyst based in Owerri said ”The use of private jets by State Governors in Nigeria is pure luxury and not a necessity, and any responsible governor, conscious of the prevailing economic situation in the country, and in their various states, should make sacrifices by using commercial airplanes to travel for engagements.

“It is difficult to see any state governor that flies in a commercial plane in Nigeria. Not one of them.

“It was former Governor of Anambra State, Peter Obi, who used to travel with a commercial plane. Money he could have used to hire a private jet were channeled into giving the State landmark development.

Mr. Chris Egemba, a public commentator in Owerri, contends that Governors have no business flying in private jets, particularly when the economy is in shambles.

“They cannot be enjoying such luxury when we are faced with economic distress and lately, insecurity in the country.

“They are leading us.When we smile, they smile with us, and when we cry, they should cry with us and not the other way round.

“The dollars they spend on hiring private jets could be used to build more schools, repair hospitals and build roads.

“There is nothing unusual if State Governors make use of private jets. Their jobs are tasking and needs a lot of traveling. Commercial planes may not be at their disposal all the time, considering the inconsistent flight schedules of our air planes.

“Governors make a lot of movements and they travel a lot for important and serious engagements.

“There is nothing wrong, if they use private jets to meet up with the demands and challenges of their offices. Hiring a private jet for an hour does not exceed N3m, depending on the size of the jet.

“An hour is enough for a state governor traveling within the country to get to his destination. And these funds are accommodated in the annual budgets of the States.

innonews - February 25, 2021 0
Frontline politician and one time chieftain of the All Progressive Grand Alliance, APGA in Imo State, Rev. Silas Anoruo, has joined the...

innonews - February 7, 2018 0
BY JEFF UMUNNA# Hundreds of supporters who believe in the governorship ambition of Imo State Deputy Governor, Prince Eze Madumere have taken to the streets...

innonews - July 8, 2017 0
Brazil international, Dani Alves, will now join Manchester City in a matter of days. Alves is expected in Manchester at the start of next week...

innonews - September 18, 2018 0
*BY RALPH EJIMKONYE, Editor At Large* With few days to the conduct of its primaries, aspirants in the Peoples Democratic Party, PDP, in Imo State...