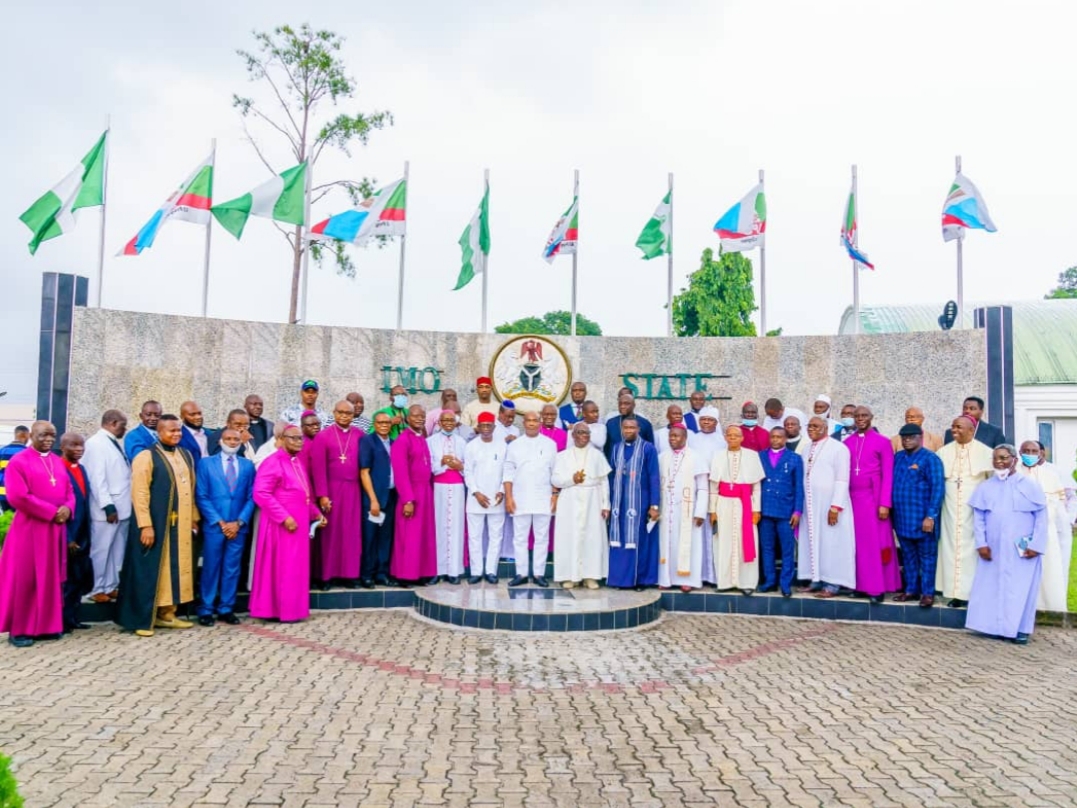 Heads of faith-based organisations in Imo on Saturday called on political leaders in the state to sheathe their sword and support Governor Hope Uzodimma in his efforts to secure the people and the state.

A statement by Chief Press Secretary/Media Adviser to the Governor, Oguwuike Nwachukwu, said the leaders comprised about 50 Bishops from the Catholic, Anglican, Methodist, Pentecostal and Evangelical Churches under the umbrella body of All Churches in Imo State (Christian Association of Nigeria).

According to the statement, the Church leaders noted that the recent insecurity in Imo was majorly as a result of political contestation and insisted that all political gladiators regardless of their political leaning must join hands with Governor Uzodimma to restore Imo to the original peaceful status it is noted for by everyone.

They spoke when they held a closed-door session with Governor Uzodimma on the disturbing recent security challenges facing Imo with its attendant implications on the people.

The Bishops also appealed to Imo indigenes in particular and Nigerians in general not to allow themselves to be hired by politicians either as unknown gunmen, bandits, herdsmen, kidnappers, Boko Haram, no matter the circumstances, as tool to destroy public and private property, saying “such does not do any one any good.”

Briefing newsmen after the meeting that lasted for about one hour, the Prelate Methodist Church of Nigeria, His Eminence, Most Rev  (Dr.) Samuel C. Uche said they came to see the Governor as a way of demonstrating their love for Imo State and more importantly, “to discuss the ugly development of insecurity in Imo State.”

The Prelate expressed the concern of all the Bishops which he said “borders on what Imo is not known for,” reiterating that “Imo people are known for peace wherever they are found.”

His words: “Imo is not known for killing, shedding of human blood and destruction of lives and property, rather Imo is known for hard work, dignity of labour, industry and a people that are very religious as over 95 per cent of Imolites are Christians.”

Bishop Uche said the Bishops in Imo State are working very hard with the governor towards returning peace and pacifying everybody that is aggrieved and appealed to the politicians to “sheathe their sword,” noting that “there will be no progress and positive development without peace.”

According to the Prelate, the Bishops have resolved to tow the line of honesty in resolving the issues on ground, adding that “they will lay blame on whoever that is wrong or whoever that has offended each other no matter whose ox-is-gored, believing that it is only the truth that will set us free.”

He said God has appointed them as leaders and fathers of the Nation and that they must maintain “high integrity, dignity, decorum, transparency and honesty in everything they do because the Bible said that righteousness exalts a Nation while sin is a reproach to any Nation.”

The Bishops concluded that “trouble is an ill wind that does not do anyone any good,” hence all hands must be on deck to bring back peace, work for industry, work for Godly love in our Imo State and Nigeria in general.

The Prelate thanked Governor Uzodimma on behalf of his colleagues for accepting to listen to them and for giving them the opportunity to express their stand and desires as Church leaders on the nagging issues in Imo State, especially the security challenges.

In his opening prayer before the meeting kicked off, Archbishop Obinna had pleaded with God to restore peace in Imo State. “Hear our voice Oh Lord, the creator of heaven and earth, hear our voice,” he had prayed.

Welcoming the body of Bishops, Governor Uzodimma thanked them for their concern and said as Church leaders they have a role a play in ensuring there is peace in our society and assured them that his government will continue to partner with the Church to ensure that Imo is properly governed.

The Deputy Governor of Imo State, Prof. Placid Njoku, the Secretary to the State Government, Chief Cosmas Iwu and the Chief of Staff, Barr. Nnamdi Anyaehie were among top government officials who attended the meeting.

innonews - January 27, 2018 0
A Media Consutant and former National Trustee of Nigeria Union of Journalists, NUJ,Chief Fidel Onyeneke has called for a more proactive measure and strategy...