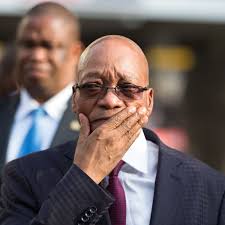 A watchdog based in Imo State, Imo Awareness Coalition,  IAC, has called on Governor Hope Uzodimma, to demolish without delay the statute of former South Africa President, Jacob Zuma, in Owerri.

Zuma had visited Owerri, Imo State capital, in 2019 and as part of activities to herald his arrival, then Governor Okorocha, also named a street after him.

Okorocha while giving reasons for hosting Zuma had said he can only become friends with advanced people like the then South Africa leader, Ghanaian President, Akufo Addo and other well meaning international personalities. And not “people like former Governor Achike Udenwa, Senator Hope Uzodinma, Ifeanyi Araraume and Ikedi Ohakim”

Okorocha had made the remark at the Imo Youth Centre, New Owerri at the 1st Annual Imo Youth Annual Lecture series/ Award Ceremony ceremony with the theme “ Focus Building An Ideal Imo”

Zuma was on Tuesday, sentenced to 15 months in prison by South Africa’s Constitutional Court for corrupt practices when he was President of the former apartheid enclave.

Reacting to Zuma’s prison sentence, the IAC spokesman, Fidelis Echendu, said the statute should be removed because “Zuma does not posses any integrity and has been proved to be corrupt by his country’s court, thus there is no basis for his statue to continue to stand erect in Imo State”

His words “What would we tell our children when they see Zuma’s statue standing firmly here?  What values would we tell them he represents?. Are we celebrating corruption and corrupt people in Imo State?. How can he be celebrated and honoured in Imo State when his country has sent him to jail.

Echendu said the outgone Okorocha administration goofed when it erected the statue at a time Zuma was already facing corruption charges.

“The Imo Awareness Coalition, hereby call on Governor Hope Uzodimma to pull down the statue. It is not only a waste of scarce state funds, there is no reason to celebrate such a man in our beloved Imo State.

innonews - August 2, 2018 0
*BY CHIEDU UZODINMA* The race for the governorship ticket of the Peoples Democratic Party, PDP in Imo State, has really given intensity to the contest. The...

Why I Support Nigeria’s Restructuring- Iwuanyanwu

innonews - May 5, 2018 0
*BY OKECHUKWU NWOSU* A Chieftain of the Peoples Democratic Party, PDP, Chief Emmanuel Iwuanyanwu has joined the clamour for the restructuring of the country before...

innonews - August 16, 2020 0
Project Nigeria, a political pressure group, has emerged, to drive the Minister of State, Education, Hon.Emeka Nwajiuba, to...