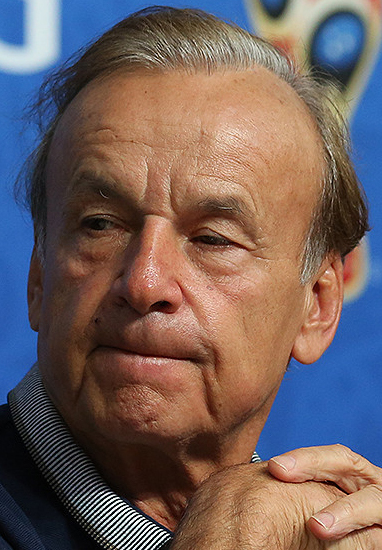 Gernot Rohr, Super Eagles of Nigeria Coach, has failed to uplift the national team. The German- Franco born tactician has managed 21 wins in 53 games, since he took charge of the Super Eagles in 2016.

He led Nigeria to the 2018 World Cup in Russia, where the Eagles crumbled to the superior football fireworks of Argentina. The team crashed out in the first round of the mundial.

Rohr thereafter led the Eagles to a third place at AFCON 2019 held in Egypt, after losing to a more prepared Desert Warriors of Algeria in the Semi Final. The Algerians went ahead to win the tournament.

Another feat the German recorded in his stuttering handling of the Super Eagles, is the recent qualification of the team for another AFCON tournament to hold in Cameroun in 2022.

Rohr may have scrapped his way to achieve these feats, but the fact is, he is yet to meet the expectations of Nigerians, which is to guide the present Super Eagles, to win a major football tournament and become one of the football giants in Africa and the globe.

He lacks the quality of a modern coach. He has displayed little or no confidence to build a technically suave Super Eagles team that can compete with other football nations.

Rohr do have the players to realize these expectations, but he seems to be bereft of the ability to blend together, the budding talents of hundreds of Nigerian players who play both in the domestic and foreign leagues. He is short of the requisite technical competence to give Nigerians, the Super Eagles of their dreams.

Rohr’s technical decline has manifested in series of dour games, with no win in his recent games of the Super Eagles. The latest is a scrappy, fumbling and wobbling 0-0 draw with the Indomitable Lions of Cameroon in an international friendly played in Austria.

The Eagles under Rohr’s tactless management had lost 0-1 to the same Cameroonian team days before the scoreless draw. The team in both games, put up shoddy and poor performances. Rohr claimed the results of the matches are irrelevant. What is important, according to him, is to play more friendly games, to give the players opportunity to showcase themselves.

This exposes his poor knowledge of the football rivalry between Nigeria and Cameroun. If he understands the history of both countries in African football, he would have not gambled with a game with Cameroun, who have remained Nigeria’s perennial football adversary.

Rohr has not shown impressive technical abilities to build a Super Eagles team, that inspires hope and confidence in Nigerians. He has experimented with over 150 players since he took charge of the team five years ago. Under Rohr, the Super Eagles have been displaying un-cordinated style of play that lacks depth, a departure from the classy display of most of the players for their various clubs in Europe.

That the Super Eagles failed to score in the double header against Cameroun, had raised questions on the technical proficiency of Gernot Rohr who has not been able to develop a potent attacking force for the team.

He had two strikers for the Cameroun friendly.  Kelechi Iheanacho, and Paul Onuachu. The duo had collectively scored 45 goals for their various European clubs last season. Onuachu was the top goal scorer in Belgian league, where he scored more than 30 goals for his club, Genk.

Iheanacho scored 15 goals for English Premier League club, Leicester City and aided the club to win the English FA Cup. The two players fired blank in the two friendly games against the Indomitable Lions because of Rohr’s poor placements of the two strikers.

Rohr is one of the few coaches, who have enjoyed considerable time to manage the Super Eagles. He has spent five years thus far as Eagles Coach, equaling the same period, Clemence Westerhof and Jo Bonfere, were in charge of the Eagles.

Westerhof led the Eagles from 1989- 1994, winning the AFCON in 1994 and led the team to a spectacular debut at the World Cup in USA same year, where they nearly reached the Quarter Finals, before a Roberto Baggio late equalizer and extra time goal sent the Azzurris of Italy into the Round of 8.

The Dutchman did not only won laurels for the team, he erected one of the best Super Eagles squad in history, bringing to the fore, a golden generation of players such as Austin Okocha, Rashidi Yekini, Sunday Oliseh, Daniel Amokachi, etal.

Bonfere Jo, who was Westerhof’s assistant, also within four years in charge of the Super Eagles, 1996- 2000, continued on the path of Westerhof, winning an Olympic Soccer Gold Medal in Atlanta in 1996 and reached the final of AFCON 2000 in Lagos.

What has Rohr achieved in five years in charge of the Super Eagles? A wobbling, scrappy team with enormous talents but plagued by poor technical depth. The NFF should reflect, pause and ponder on Gernot Rohr.

innonews - December 17, 2020 0
The Imo State government has approved a forensic audit of the state owned Imo State University, IMSU.  This is coming on the...

innonews - February 25, 2022 0
The Project Nigeria Group, PNG, has described Minister of State, Education, Hon Chukwuemeka Nwajiuba, as the best among several aspirants in the...