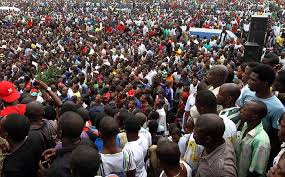 President Muhammadu Buhari’s mother-tongue, they say is Fulfulde, the language the Fulanis use in communicating with, and understanding, themselves. He speaks and understands Hausa and English languages as well. His tough broadcasts to the nation are often rendered in English language, while he reserves the Hausa for use in Daura, where he comes from.

Recently, when he lost his cool at the deviant behaviour of some misguided youths in the south eastern part of the country, he threatened that he would speak to them in the language they understand. That language, from every indication, was not Fulfulde, nor Hausa, nor English language. The president spoke metaphorically.

The youths had woken up from the bad side of their bed one day and picked up arms to wage war on the police, killing policemen and destroying their stations for whatever reasons they may have conceived. Their major strike on the Correctional Centre in Owerri, capital of Imo State, where they freed inmates promptly brought the immediate past chief cop of the federation to the town. Former IGP Adamu spent the night in Owerri as the Inspector-General of Police and left the following morning as a former IGP, to show how grievous the lapses were. In the same night, the police headquarters in the city was hit, vehicles destroyed and those in custody freed. Although the acts were despicable, no one would say that the smoke went up the sky without a fire somewhere.

What really went wrong? On the eve of the incident, the former IGP was quick to point accusing fingers at the outlawed Indigenous People of Biafra (IPOB). The group promptly disowned the act, saying that their Eastern Security Network (ESN) was only after protecting the vulnerable south easterners from the marauding killer herdsmen since the police and army appear incapable of saving Nigerians. Shortly after, in the social media, a group flaunted itself as the Biafra Revolutionary Forces. It was not clear whether the group had anything to do with the IPOB or ESN.

Before the formation of ESN, the nation as well as the international community had watched non-violent IPOB members maimed and killed like chickens when they went about clamouring for a separate state from Nigeria. What we must give a thought to is that it is unnatural that somebody would aspire to quit a union that is beneficial to him or her.

The case of the gun men in the south east was not the first youth insurgency to hit the country in recent times. There have been various violent groups speaking boldly, tormenting the Nigerian citizens and appearing to overwhelm the security men. All give a semblance of a country out of control, a badly managed country, a nation incapable of giving jobs to its young population, a failed state. These youths, east, west, north and south, are hungry and angry. They are crying and begging for opportunities for growth in their home land and, painfully, they are not getting these opportunities. They want the pangs of hunger removed from their system so that they will no longer be angry. All of the warlike groups, the Boko Haram, killer herdsmen and so on, express the frustration in the younger generation who appear to have lost faith in the country, seeing it as one that holds no future for them.

The language this disillusioned bunch would understand is the language that puts them in a position to fend for themselves and be able to meet their obligations. The level of economic degeneration of the country has been abysmal enough for citizens to cry themselves hoarse, the major cause being the state of the nation’s electricity supply. In the 1970s and ‘80s generators were seen as mere standbys rather than the main supply they are made to be these days. Then, large scale and small scale industries existed and they begged for manpower. This prompted the government to deploy all means possible, including sending many Nigerian youths, outside the country on scholarship to acquire technological and managerial skills to fill the yawning vacancies in the industries. Then, polytechnic education was made tuition-free and various companies paid annual visits to the institutions to recruit manpower just as the students were dropping their pens after their final examinations.

A flashback to those days evokes sadness when we discover that the booming factories of the 70s and 80s had moved to neighbouring countries where they get adequate electricity supply, while still exploiting the huge market potentials Nigeria offers them. All they do is transport their finished products into the country through our porous borders. That is the root cause of our national malaise.

Nigeria’s high unemployment situation became a global concern to the extent that former US President, Bill Clinton, who visited the country sometime, among other world leaders, stressed on it as the main source of the nation’s woes. Indeed, it is an emergency which demands urgent action, not in the form of Tradermoni or other youth empowerment schemes that offer them not more than N20,000 a month.

Another worrisome development is that some state governments appear to stifle enterprises that are already grappling with inclement business weather, using taxes. As much as taxes are necessary, the era calls for the pampering and nurturing of enterprises, especially the upcoming ones, so that they grow strong enough to provide the badly needed jobs. More pathetic is the daily maiming of street traders in some cities by taskforce men, even when they do not constitute any menace. Besides, the government appears to have lost control of “area boys” who illegally impose their own taxes on businesses, harassing them at will.

The Late President Umaru Musa Yar’adua had his own fight waiting for him as soon as he entered the Aso Rock. A sickly man too, he was confronted with the Niger Delta militants who were hell bent on disrupting the nation’s oil flow thereby putting a spanner to the engine that drives the economy. Yar’adua spoke a language, the language of love and understanding, the language that soothes souls and calms frayed nerves. The militants understood and today they are quiet forever.

The late President Yar’adua holds a lesson for occupants of Aso Rock, present and future, that the best general is the one that wins a war without spilling blood and expending costly arsenal.

innonews - August 17, 2021 0
The leader of  Committee for World Peace, and Global Prolife Alliance, Dr Phillip Njemanze has opposed some sections of the VAPP  bill...

innonews - September 22, 2018 0
*Aspirants Resort To Various Tactics* "It is A Five Horse Race"- Analyst BY: RALPH EJIMKONYE* Fear of the unknown has gripped some governorship aspirants in the All...