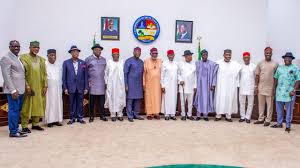 The South East Coalition For Good Governance, SECG, has backed Southern Governors, on its demand that the next President of Nigeria should emerge from the South.

Emmanuel Okwu, President General of the Coalition, while briefing newsmen in Enugu, said the Southern governors “indeed the read the mood of the region as regards the 2023 presidency”

He said the demand is in order, stating that rotational presidency has proved to be the only panacea to guarantee equity and justice in the country.

He said however that the South East should produce the next President of Nigeria, on the grounds that the last time it produced a President was in 1966.

“We do not need a soothsayer to tell us that the next President of Nigeria should come from the South East zone.

“All the sub zones in the Southern Region have all produced Presidents, except the South East.

“Our Southern brothers should see this clear reason and rally round support for the South East to produce the next President of Nigeria.

He however advised those aspiring for the Presidency from the South East, not to relax and “wait to become President on a platter”

“We must work for the Presidency and not to sit and wait for it to come.

innonews - May 14, 2018 0
PRESS STATEMENT Preparations are in full swing for the first South East Town Unions Economic, Security and Leadership Summit. The Summit, which is expected to attract...

innonews - November 21, 2018 0
A High Court in Owerri, Imo State, has nullified the October 6, 2018 repeat governorship primary of the All Progressive Congress, APC in Imo...

innonews - August 2, 2020 0
The newly elected Chairman of the Peoples Democratic Party, PDP, Engr. Charles Ugwu, has vowed to rel-claim victory for the party in...

Uzodimma: There Is Nothing Called Unknown Gunmen, Opposition Afraid Of My...

innonews - April 4, 2022 0
Imo State Governor, Senator Hope Uzodimma, has said there is nothing called unknown gunmen, stating that the resurgence of insecurity in the...