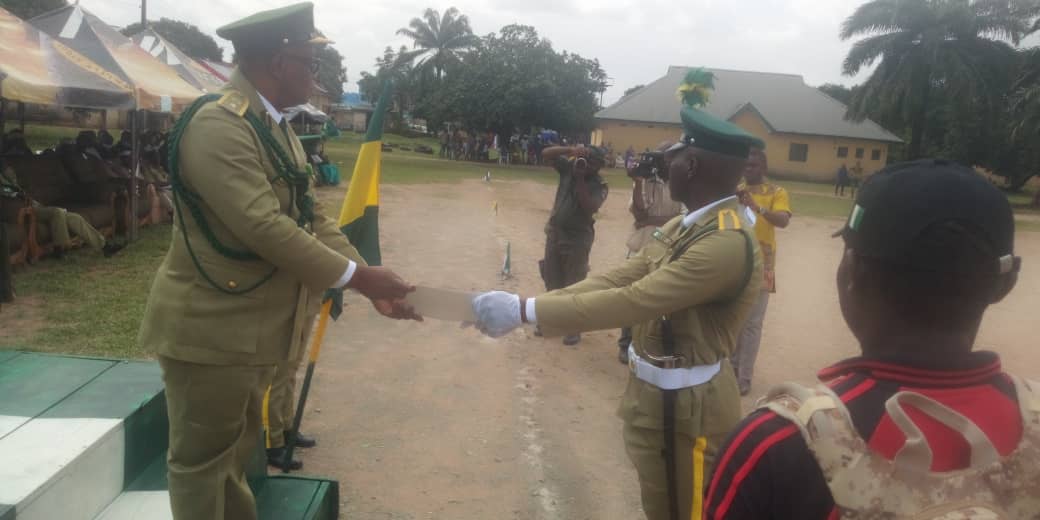 The Passing Out Parade Ceremony of the Batch B 9th Basic Recruitment Course which was held on Friday at the Commandant Correctional Service Arms Training School, Owerri, was spectacular with the graduands appearing gallantly colourful.

According to him, it is a compulsory training meant for fresh recruits into the service which is designed to mould their personality, character and psyche in aligning with all the tenets of a paramilitary outfit, urging the personnel to exhibit excellence, in accordance to training or drilling of the command while performing their responsibility dutifully.

Nababa who congratulated the new recruits for their endurance, perseverance and good conduct, warned them against “any act of indiscipline, disloyalty, disobedient to constituted authority and insubordination which will be decisively death with”, reminding them that “the service is strictly guided by the Nigerian Correctional Service Act 2019 and the standing order”.

In his welcome address, Commandant, Correctional Service Arms Training School, Owerri, Charles Sunday Esan, who expressed satisfaction on the successful passing out parade of the personnel of the command, said “it is hoped that our indefatigable and responsive Controller General of Correctional Service, will meet the challenges of “construction of befitting parade ground and pavilion, construction and furnishing of modern administration block, barrack accommodation, procurement of electricity transformer, construction of modern students hostel, sinking and channeling of boreholes and extension of water supply to all parts of the school”.

The highlight of the passing out parade was the recognition and award of excellence to distinguished graduands.

innonews - October 5, 2017 0
Teachers In Imo State had a herculean task trying to get themselves organized for the World Teachers Day Celebration in Owerri. Here photos posted...

innonews - January 10, 2021 0
BY RALPH EJIMKONYE Three presidential aspirants vying for the presidency of Ohanaeze Ndi Igbo, have quit the contest.

Owerri Zone And Failed Quest For Imo Governorship In 2019 (1)

innonews - June 12, 2017 1
By Don Uba (donuba2013@gmail.com) Over the weeks, I have read the pages of the newspapers, heard on radios, watched on televisions and also read on...

‘To Be In Opposition, Not A Death Sentence’,Imo PDP LG Chairmen...

innonews - May 4, 2020 0
BY RALPH EJIMKONYE Newly inaugurated local government chairmen of the Peoples Democratic Party, PDP in Imo State have been...