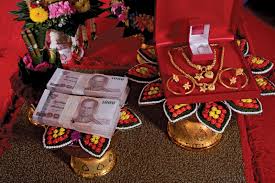 Away from the politics of the nation, which at best, has taken the form of gangsterism that never listens to wise counseling let alone tolerate any kind of opposition, we could find delight, somehow, in discussing other issues that, though may sound ordinary, could be critical to the smooth running of the society. It is the issue of bride price as it affects the dignity of women.

It becomes even more pertinent to have a deep thought about the rather banal subject in this era when the women are struggling to have a share of their fathers’ properties, leaving right thinking persons to wonder how a man could pay a price on you, take you home and you still look behind for equal rights in the home you had left for good.

Bride price, which unwittingly rises with the inflationary trends in the economy, is one phenomenon that has attracted widespread condemnation, although grooms and their families still find a way to pay and get what they want. Some years back, the Nenwe community in Enugu State pegged bride price at N5,000 in what they termed the new millennium marriage bonanza. In Igbo land, mainly, some traditional rulers and their cabinet members have tried to reduce the cost of marrying in their communities. Yet, sometime ago too, a seminar on “Igbo Women in Socio-economic Changes” called for the abolition of bride price. This is an indication that the phenomenon is considered as one that constitutes a societal malaise and must quickly be dealt with.

Sad enough, bride price is an issue that has defied legislation. Parliamentarians in the second republic talked about it while communities have tried in vain to peg it in practice, not just in theory. The issue, when mentioned in a gathering, is treated like a big joke and its seriousness melts away in laughter and amusement. Comedians choose to disparage communities perceived to be notorious in high bride prices. Yet, a community or hamlet which suffers the inflation in another community returns to adjust their own prices accordingly. The far reaching harmful social and economic effects on society are lost sight of.

The story behind the escalation of bride price is one that shows that daily we degenerate in folly rather than grow in wisdom. When some of our young men who left the shores of Africa to fight for the white man in the First World War came back home, they had lots of money to spend, having been heavily compensated through what was in those days known as their allotment. Starved of women, they pounced on the available damsels, dangling their fat wallets and even dispossessing some men of their wives. Then, the bride price which has actually been with us since ages grew into a monster.
This is similar to the present day situation where men on economic missions abroad come home with their dollar-power in pursuit of home bred girls. They throw up so much money that the mouths of parents water. Home-based bachelors are worse off in the rush as parents of available brides look out for prospective grooms from abroad.

The demerits of high bride price are many. It leads to a pile-up of overgrown girls without husbands and aged men without wives. The result is promiscuity and moral decadence. A man’s status, to a large extent, determines the degree of his acceptance in society. If he is married, his image is enhanced and when he speaks, people listen. Everyone desires societal acceptance and does anything to get it. In their craving, some are likely to indulge in unholy acts like fraud, 419, drug pushing and armed robbery, to get enough money to marry. So also, a woman’s social security is assured once it is known that she is unde a man as his wife. She is practically insulated from the intrusion of mischievous men who might want to toy with her.

In some societies, it is the dowry that is paid. The dowry is property or money brought by a bride to her husband’s home when a marriage is contracted. In places like India where it is practised, the father of the woman looks for money to give to his son-in-law who, it is reasoned, has come to inherit part of his responsibilities and who needs to be mobilized. This is contrary to our own culture where the suitor turns his pockets inside out for his in-laws and goes home with nothing left for the upkeep of the new family.

One reason often advanced by some parents who could beat Shylock in a competition is that they spend money raising their daughters and so deserve compensation. If this argument is held, then the situation is not in any way different from the poultry keeper who spends money feeding his chicken and so aspires to make profit in the sale of the chicks.

Dowry or bride price, I believe the more sensible, less hypocritical thing is not to compel any party in a proposed marriage to pay money. Like the Lord Jesus Christ said, the man should leave his parents and cleave to his wife, while the woman leaves her own parents as well and cleaves to her husband with no strings attached and they would become one unconditionally.
I expect women to be in the forefront of the fight against bride price which does nothing else but debase womanhood, projecting them as ornaments for sale. Anything with a price tag is a commodity and it was only in the slave trade era that human beings bore price tags. Bride price, in no way, raises women’s status. That millions were paid to their parents gives the same impression of a young man who goes into an auto shop and gets a brand new Rolls Royce, or Toyota, or even a used one. High bride price makes the realization of the much talked about women emancipation more difficult because social justice forbids a ‘property’ in a man’s house to shout for liberation after willingly submitting to be purchased.
This view is without prejudice to the marriage ceremony which ought to take place in accordance with the purse of the family. In that case, there is no compulsion as to how much money to be spent on the ceremony. To say that a price is paid for a human being is dehumanizing.

In the present circumstance, the women stand to suffer since they outgrow marriage faster than men due to their biological nature. At 50, a man goes into the bride’s market and gets the youngest of them all. At that age, a woman is like Siberia, everyone knows it is there but no one seeks to go there.

Why Catholics Went On Procession In Owerri- Archbishop Obinna

innonews - June 6, 2018 0
*BY TONY UDEH*. Ongoing killings across the country and bad governance were two key factors that motivated Catholics to embark on procession along major streets...

innonews - June 17, 2017 0
Chelsea management are said to be unhappy with Coach Antonio Conte over the text message he sent to Diego Costa. Sportsmail reports that no firm...