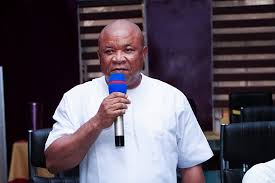 Speaker, Imo State House of Assembly, Rt. Hon. Paul Emeziem has been described as the most competent lawmaker to lead the 9th assembly, as currently being constituted.

The Chief of Staff to the Speaker, Dr. Alex Onyebuchi stated this while reacting to recent claims by the PDP caucus in the House led by the minority leader, Hon. Anyadike Nwosu.

Onyebuchi said the claims were calculated attempt to malign the person and personality of his boss who according to him has remained outstanding in his current position as the leader of the House.

According to him, “before now, every member of the House including the suspended ones have all in one occassion or the other testified to the leadership proactiveness and dexterity of Rt. Hon. Paul Emeziem.

“His name and personality have often been attached to all qualities of a good leader and speaker. Hence, since he assumed office, he has tried his best to ensure stability in the House and mutuality of his colleagues.

“The facts are there to prove that he has the capacity to lead any human affairs and can be said to be the most competent lawmaker in the current 9th assembly to pilot the affairs of the House.

“Those who think otherwise about Rt. Hon. Paul Emeziem today are only doing so because of their present disposition to curry sympathy from the public. And we pity them. Their claims are laden with lies, propaganda and undue sentiments.
He continued, “Also going by his (Emeziem) antecedents right from his days as an elected Onuimo Council Chairman and state Chairman of two vibrant political parties, UNPP and APDA, till date, it has remained an obvious fact that he has not been found wanting as far as effective leadership and representation is concerned.

“And today in the House of Assembly, he has also distinguished himself in character and capacity. So we want to advise the general public to disregard the claims as they are handiwork of mischief makers, unfounded and misleading.”

After Mavrodi’s Death, MMM Officially Shut Down In Nigeria

innonews - April 8, 2018 0
Following the reported death founder of  Sergey Mavrodi, his Ponzi Scheme, Mavrodi Mundial Moneybox (MMM) which collapsed a year ago have forced the management of the Schemeofficially...

innonews - December 15, 2020 0
The Nigerian Communications Commission (NCC) has given telecommunications operators in the country two weeks to block all SIM cards that are not...

innonews - April 24, 2018 0
Some governorship aspirants of the All Progressive Grand Alliance, APGA in Imo State kept mum at the weekend over newspaper report that 15 of...

innonews - August 7, 2021 0
Dr. Godwin Maduka, has emerged the governorship candidate of the Accord party, for the Anambra governorship election. Maduka emerged...