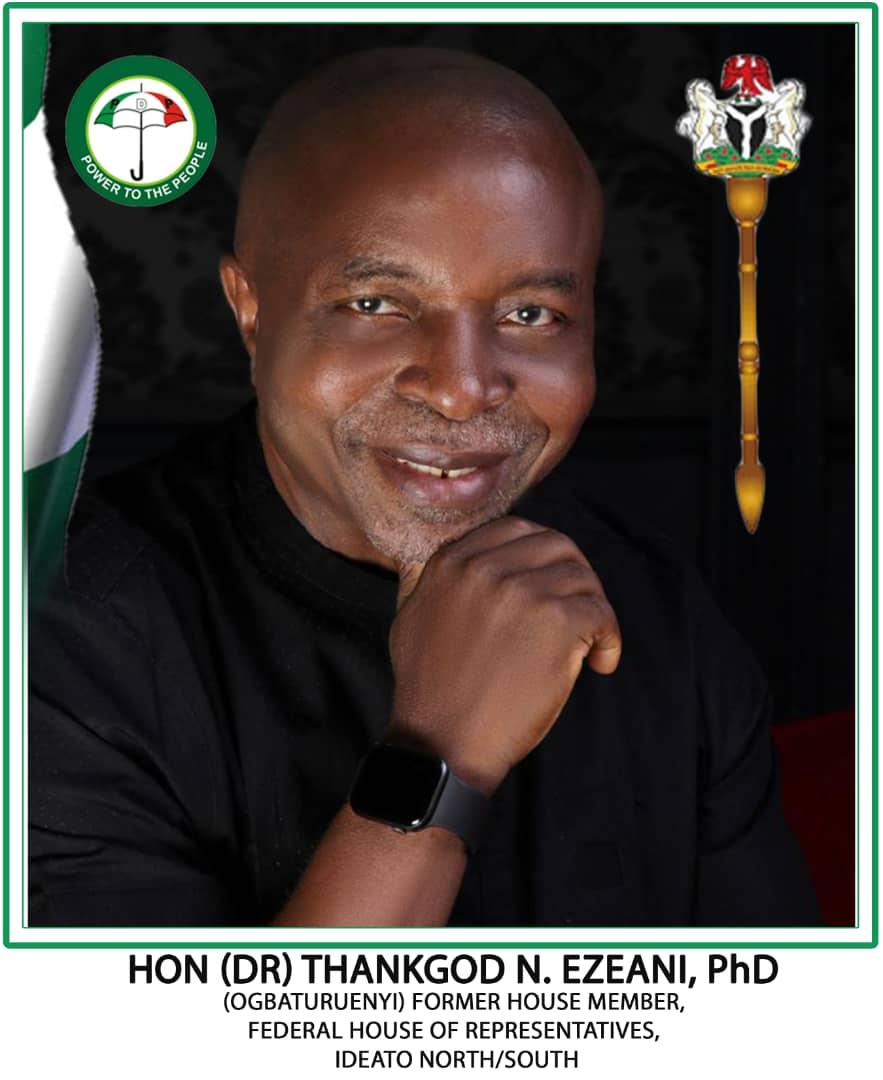 Having dedicatedly read the regrettably haphazard and rather careless public post made by one Ambrose Nwaogwugwu, concerning the esteemed person of the Hon. Dr. ThankGod Ezeani, and his reaction towards the unlawful suspension of Imo Lawmakers by the Speaker of Imo House of Assembly, I have come to the irresistible conclusion that the general belief held so dear, that youths would usually make better thinkers and leaders, need to be revisited, as most youths in the social media space are yet to learn, unlearn and relearn. Littering all over the social media space is a lot of hungry media wannabes trying to gain relevance by running from pillar to post, scrambling for leftovers.

I watched from a distance, and in my usual manner of letting things slide, I would have kept my cool. But when stupidity as the chi’ that guides the ofeke manifests to cross the line, silence can no longer be golden.
According to the Nwogwugwu, ”the Speaker has graciously constituted an adhoc committee to hear the complaints of the affected lawmakers to prove their innocence, so that the issue of fair hearing does not arise”. Quite laughable it is. One would be prodded to quickly ask, “do you take a decision before investigation?”. It is akin to saying that Court of Law passes judgement, then comes back to hear the case of the parties as an afterthought. How so irregularly inappropriate that would be? And to think that someone who claims a form of education put that up as a defense? The lady of justice must be behind herself in tears.

Further, from that rusty statement, it would appear that the Speaker has accepted his mistakes and is desperately looking for infantile excuses to extinguish his failures and illegalities. The Speaker failed woefully, otherwise, why would he suddenly constitute a panel after taking an unlawful action and making a manifestly wrong decision? Is the panel to investigate what he has already passed judgement and sentence upon? To what end would that be? Why must he place the cart before the horse? The further deadly implication would be that our dear speaker passed judgement either out of malice, ill-will, or on a mere suspicion of facts unfounded by any form of evidence.

Nwaogwugwu and his pay masters should have known that the doctrine of Fair Hearing cannot be an after thought. The law insists that Audi Alteram partem (Hear from the other side) before giving a verdict. It was the Imo State born jurist, The Honourable Justice Chukwudifu Akunne Oputa (of the blessed memory), who said, and I quote, that “God created man and gave him two ears. That is because he expects man to hear from both sides. Therefore, hearing from one side and passing judgement based on the evidence of that one side is a flagrant violation of the principles of Natural Justice”.

This concept is further entrenched in section 36 of the 1999 constitution of the Federal Republic of Nigeria. It is deemed a sacrosanct right, and it does not cease to apply because a House of Assembly Speaker is involved. The law is a respecter of no man. But it would appear that Mr. Nwaogwugwu has charged the law to respect his paymasters, at the detriment of justice and fair play. May the God of Justice kindly forbid it.

Enlightened Imolites, quite unlike Mr. Nwaogwugwu, would want to know if what the Speaker tagged ” Parliamentary Misconduct and Insubordination”, by the lawmakers, were brought before the House of Assembly in any sitting. Is it lawful, democratic, and constitutional to mete out punishments to elected lawmakers of a state without telling them their offenses in clear terms, and affording them a hearing? Imolites are anxious to know what exactly these unmentioned parliamentary misconducts of the lawmakers are and when, where and how the unparliamentary acts took place. These are questions begging for answers and I think the Speaker should come clean and address Imolites on these issues and stop window dressing. In any case, quite unforgivably forgivable, the ignorant writer has no business with legislature. It would also appear he has no business with Law and Order.

Now to a more detestful part I refer to as the crux of the matter. It is beyond the comprehension of a school dropout like Nwaogwugwu who now writes for some Hushpuppies that have taken over the Imo State House of Assembly (If you like call them yahoo yahoo boys turned legislators .In due time, I shall make public their names) that there is anything called ‘standard order’ in the House. He certainly made no reference to this, and I do not feel obliged to educate him.

Going by Ambrose Nwaogwugwu’s posturing, one may be tempted to ask, is he now an aidee to the Speaker? History has him known for running from Pillar to Post like a confused rat. Now in his usual sprinting excersise, having abandoned PDP and run to APC for peanuts, what business does he have with an aspiring PDP senatorial candidate? I would only advise him as a brother and fellow youth with the words- ”He who tries to hold many things in one hand ends up holding nothing”. Your attempt in serving two masters at the same time will finally ruin the remaining part of your miserable life. I am certain of this.

I would have been so disappointed if the well read Ezeani Media Team considered it necessary to respond to this biased, unrealistic, poorly written piece from an obviously disoriented and demented errand boy who is more interested in what to eat than his reputation and personal integrity. I personally waited for hours, to see if anything would come from the well organized Ezeani Media Team. It did not, and then I smiled in full gladness that they have lived up to what they are known for. But I? I have nothing at stake. I’m neither an institution nor a media aidee, nor even a hungry peanut chaser like Nwaogwugwu. So I shall reply Nwaogwugwu and his paymasters, and I shall challenge them to a public debate, if they so bet.
I blame the leadership of the country and the drivers of the economy, that there is extreme hunger in the land, making people like him waver in thoughts and coherence. It is still these same leaders that Nwaogwugwu serves. The cause of his hunger is around his neck!

As a graduate of Petrochemical Engineering from the Federal University of Technology Owerri, I worked in Ronad Oil and Gas factory, a multi-billion naira lubricant plant in Uzii, Ideato North LGA, owned by the Hon. Dr ThankGod Ezeani, and benefited immensely from him intellectually, financially and otherwise. I cannot imagine a school dropout attempting to deride an accomplished industrialist, and a man with impeccable integrity who obviously understands the rudiments of legislature and the concept of separation of powers.

A responsible, cultured young boy with common sense cannot come public to write about a highly revered successful Nigerian politician, astute economist and Entrepreneur in such a rude manner simply because of 20k alert. This clearly exhibits emptiness, void mindedness and poor upbringing. There is an urgent need to replicate Moral Art Education in the Nigerian Academic curriculum for the benefit of small boys like Nwaogwugwu who are bereft of moral values and principles.

From my corner, I shall keep watching.

Ohakim Will Be Governor Again- Kinsmen

innonews - February 16, 2020 0
BY: CAJETHAN DIKE The Imo Awareness Coalition, IAC has expressed concern why the Supreme Court does not follow...

innonews - August 16, 2017 0
Charly Boy’s Our Mu Mu Don Do” protest has been suspended. The protest which has been ongoing in the city of Abuja got messy...