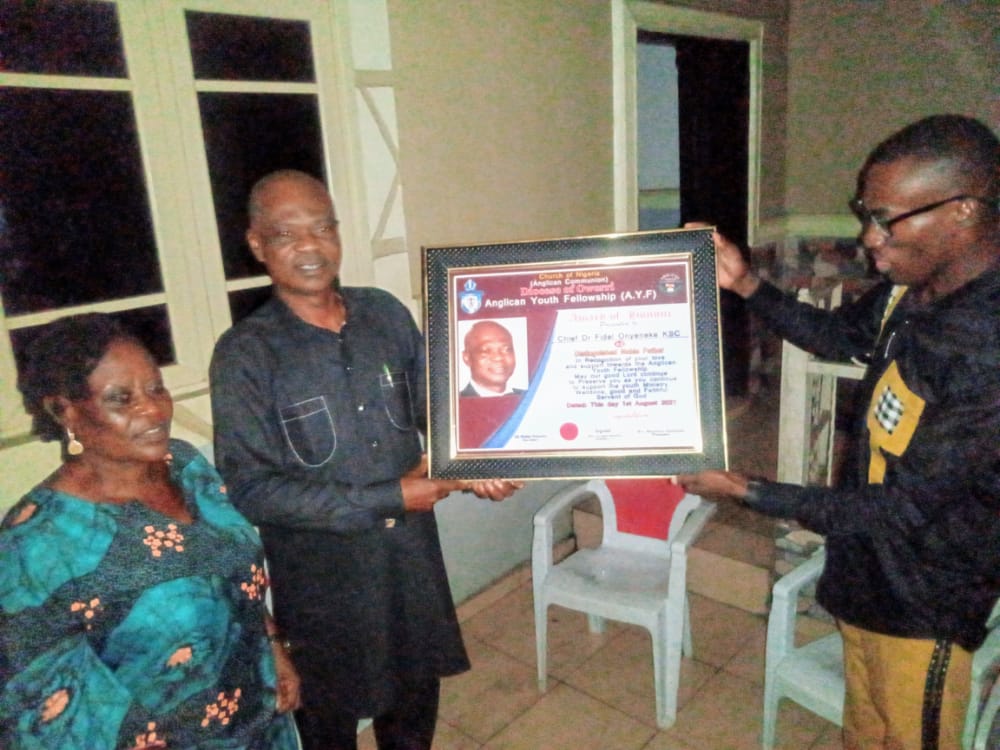 Presenting the award, the Diocesan President, Evangelist Benjamin Alajemba noted that Chief Fidel was prayerfully selected amongst legion based on his glaring contributions to the Anglican Diocese of Owerri and the society at large. Further speaking,the president made known to him the intention of the fellowship to establish a media house and beseeched Chief Onyeneke to get involved and assist based on his long lasting experience as a media consultant.According to him, this project would help engage most of our idle youth as well as generate revenue to the Diocesan Youth Fellowship.

Speaking after receiving the award, Chief Onyeneke first off thanked the Diocesan Executives for finding him worthy of note. He then called on them and the Christian youth entirely to remain focused and live a life worthy of emulation, shun cultism and always try as much as possible to contribute to the socio economic growth of the church and nation at large. He finally pledged his continuous support to the fellowship while assuaging them not to relent in propagating the gospel of Christ.

In his words, kachison Ekwugha, the P. R. O described the awardee as a father of all, while pointing out his numerous unsparing generousity to anyone who comes in contact with him, not excluding his selfless community services in his home town Avu .

Finally, the Vice President, Barr Ekeoma Onyema-Opara while giving the vote of thanks, thanked Chief Fidel for being receptive enough to them in a manner they least expected, while praying God to continue to sustain him in all his endeavor.

Ihedioha: PDP Poised To Take Over In 2019, Hails Secondus Emergence...

innonews - December 11, 2017 0
The smooth and transparent conduct of the elective national convention of the Peoples Democratic Party, PDP is a signpost that the PDP is poised...

‘I Was Promised Nothing By APC’, Umahi Gives Reasons For Dumping...

innonews - November 18, 2020 0
Gov.Umahi had dumped the PDP for APC, citing injustice to the Southeast by the opposition party as major reason for his defection