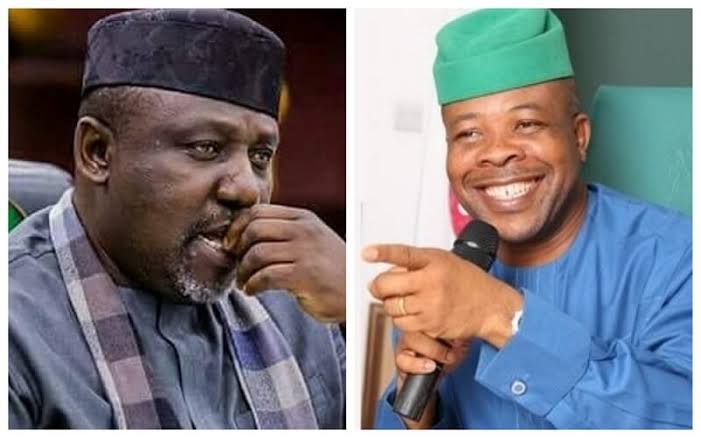 With clear indications that they are losing out in the scramble for the structure of the All Progressive Congress, APC, in Imo State, there are speculations that political footsoldiers and allies of former Governor of Imo State, Senator Rochas Okorocha, may decide to pitch tenth with the Peoples Democratic Party, PDP.

Okorocha has been having a running battle with Governor Hope Uzodimma over the structure of the APC in the State, and the resolve of the Uzodinma administration to proceed in recovering government assets and properties said to be in the custody of the former governor, has further deepened the rift between the duo.

With the non participation of Okorocha and his allies in the ward congress, namely his son in law and 2019 governorship candidate of the Action Alliance, AA ,Uche Nwosu, Senator Ifeanyi Araraume, three members of House of Representatives loyal to him- Hon Ugonna Ozuruigbo, Hon.Kingsley Uju and Hon Paschal Obi, and thousands of loyalists of the former governor, there are feelers that Okorocha and his men may decide to call it quits with the APC, sooner or later.

They had also boycotted the APC membership revalidation exercise held last month. And even when the exercise was extended for two weeks in Imo State and two other States, they stayed away from it.

In a bid for political survival ahead of the 2023 general elections, it is unclear if Okorocha’s men would continue to remain in the APC, where they have little or no relevance anymore, particularly at the State level.

Despite their insistence that Dan Nwafor is the authentic Chairman of the APC in Imo State, on the basis of a Court order, they seem to be singing an old lullaby, as the Caretaker Extraordinary Convention Planning Commitee, CECPC, of the APC has continued to recognize Marcellinus Nlemigbo, as caretaker State Chairman of the APC.

Based on the prevailing political circumstances, it is suspected that the next political destination of Okorocha’s men could be the PDP, the main opposition party in the State.

Sources said the Okorocha camp may be waiting for the outcome of the PDP national convention, which is expected to hold in December, before proceeding with their next political move.

If this happens, many political analysts wonder how Okorocha and his allies would ‘co exist’ with staunch PDP heavyweights such as former Governor of Imo State, Hon.Emeka Ihedioha, who is the leader of the party in Imo State.

Ihedioha and Okorocha are fierce political foes. Ihedioha and the PDP were the “tormentor in Chief” of Okorocha’s eight years in office.

The hostilities continued when Ihedioha emerged Governor in 2019, as the latter’s administration instituted several probe panels which probed Okorocha’s eight years in office.

“Ihedioha gave Governor Uzodimma the ammunition to aim and shoot at Okorocha” said Greg Okorobia, a political analyst, who recalled that Uzodimma latched on the probe panels Ihedioha instituted to probe Okorocha.

However, since politics is about permanent interest and no permanent foe, there is a uniting factor that could bind Ihedioha and the PDP, and Okorocha and his footsoldiers in APC, together.

Governor Hope Uzodimma, according to analysts, could be the uniting factor for Ihedioha, Okorocha, Araraume and Uche Nwosu in the PDP.

“They all have an axe to grind with Uzodimma and this will provide the conducive atmosphere for them to co exist politically. It’s all about managing their various political interests” said Ugwuanya Okechukwu, a PDP chieftain, who spoke to this newspaper on the issue.

How this alliance or arrangement works out is yet to be deciphered, as Ihedioha, Nwosu and Araraume, are all nursing the ambition to become governor of Imo State.

Analysts fear that this could be a recipe for choas, except a power sharing arrangement is carefully structured and put in place prior to the possible defection of Nwosu and co to the PDP.

Another analyst, Uche Okebata said “Ihedioha and Okorocha in one boat?. This would be a delight to watch”

But Uche Nwosu, has quickly debunked insinuations that he could be leaving the APC for the PDP.

He said he remains a founding member of the APC and has not joined the PDP and does not intend to do so.

According to a statement by his Media Aide, Nwadike Chikezie, he said “It is a blatant lie and handiwork of mischief makers whose stock in trade is nothing other than peddling false information inorder to misinform the public and disparage the personality of Ugwumba Uche Nwosu”.

innonews - November 5, 2019 0
The Imo State Police Command, Owerri, has warned against the planned establishment of a “Shadow Government” by a group of people,...

innonews - September 27, 2018 0
Shocking revelations have emerged where earthquakes may occur in Nigeria. The was revealed by the National Space Research and Development Agency (NASRDA). Director General of NASRDA,...

innonews - January 26, 2019 0
Tragedy was miraculously averted on Saturday, January 27, 2019 when Mercedes Benz jeep suddenly skidded off the road and ran into...