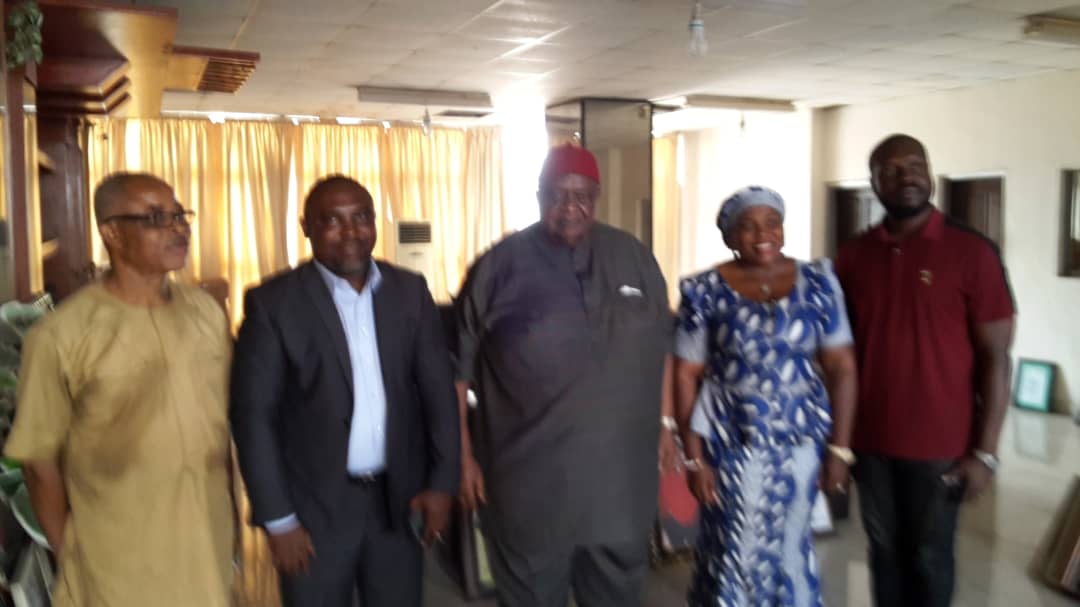 A renowned Engineer and Scientist Chief Emmanuel Iwuanyanwu has challenged scientists across the globe to embark on intensive research to discover the real and root sources of Covid 19 and some other environmental and atmospheric deadly viruses and diseases ravaging humanity.

Engr Iwuanyanwu who spoke when the Chairman of the Imo State Chapter of the Nigerian Institution of Environmental Engineers (NIEE), Engr Dr Claribel Ngozi Nwogu and her officials called on him in his office to present him with the Award of Distinguished Outstanding leadership and meritorious services to the Engineering Profession and Mankind in general.

Chief Iwuanyanwu who in his early days discovered the Asphaltic Concrete Pavement being used all over the country posited that Environmental Engineers have greater challenges and lots of work to do to save humanity from viruses and diseases which are ravaging the society globally.

He said that presently, everybody is talking of environmental degradation and maintained that the onus lies on them to find lasting solution to it.

He said that Ebola, HIV, Cholera and Covid 19 are said to be caused by environmental degradation and all are hazardous to human existence.

Going spiritual on Creation, Chief Iwuanyanwu said when God created the Universe, He- God handed the world over to mankind to conquer, develop, inhabit, make his wealth and be in charge of everything in it.

He said by that, Engineers are called by nature to ensure not only healthy environment, but healthy habitation by humanity.

Chief Iwuanyanwu, a renowned Civil Engineer guru, whose immense contributions in Engineering and Science have been acknowledged globally described Environmental Engineering as a very important aspect of their profession.

He commended the Chairman of the Institution, Engr. Mrs Ngozi Claribel Nwogu for her new position, eloquence, doggedness and determination to improve the environmental estatics of the State.

Taking a global view of the present state of the nation’s socio-political environment, Engr Iwuanyanwu appealed that all hands must be at work to ensure healthy co-habitation among all ethnic groups in the land.

He noted that the people of Igbo nation are great travellers and developers wherever they find themselves and stated that Nigeria if well restructured and peaceful co-habitation reigns, the country will be a world power with economic prosperity to be reckoned with.

Earlier in her address, the Imo State Chairman of the Nigerian Institution of Environmental Engineers, Engr Mrs Ngozi Nwogu said they came to honour one of their foremost resourceful and most highly respected senior Professional, Engr Chief Emmanuel Iwuanyanwu for his unqualifiable numerous outstanding Distinguished Leadership and meritorious services to their profession and humanity in general.

She said that the institution of the Annual Competitions are in recognition of Chief Emmanuel Iwuanyanwu’s numerous contributions to the growth and development of the Engineering Profession in Nigeria and African continent as well as his love for youth empowerment and human capital development.

She solicited assistance to enable them tackle some of their pressing duties.

innonews - September 10, 2018 0
The Ebonyi State Government has increased the allowance of Corps members serving in the State. They will be paid N10,000 starting from September 2018. Governor of...

innonews - February 19, 2018 0
The Vatican on Monday said it had to stand down Bishop Francis Okpaleke as Bishop of Ahiara Diocese. Okpaleke had been appointed as Bishop of...

innonews - May 16, 2020 0
A syndicate of fake dealers on tickets, emblems and vehicle plate numbers has been apprehended by officials of the Imo State government.