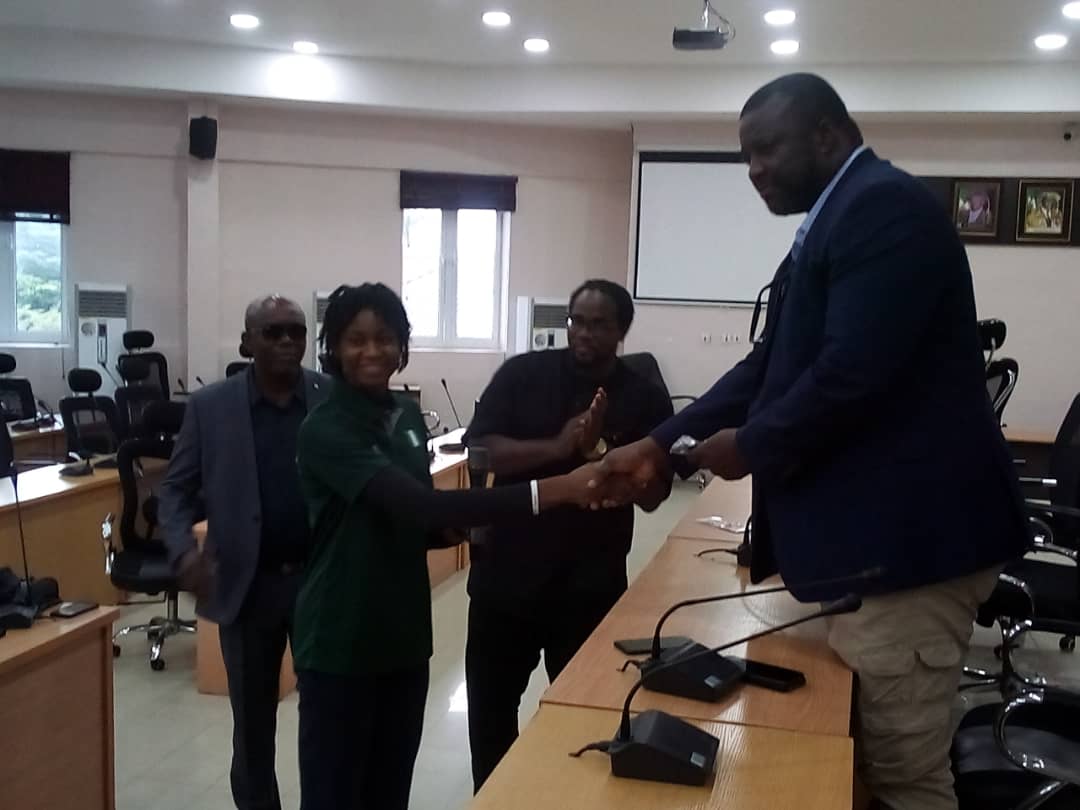 A Nigerian female representative in Taekwando at the 2020 Tokyo Olympic, Elizabeth Anyanacho has returned back to her to school Federal University of Technology Owerri (FUTO) in grand style after a successful outing.

Elizabeth stormed her institution with an Olympic Medalist Chika Chukwumerije in a courtesy visit to the Vice Chancellor of the Federal University of Technology (FUTO) Owerri,
Prof. Mrs. Nnenna Oti ably represented by the Deputy Vice Chancellor, Prof.Emeka Emmanuel Oguzie.

The duo were accompanied by the Imo state Commissioner for Youths and   Sports Development, Hon. Daniel Chike Ogu.

Elizabeth, a 400 level student of Statistics of the univarsity, represented Nigeria at the Tokyo 2020 Olympics in the Taekwondo female -67kg category.

She became the first woman in 16 years to represent Nigeria at the Olympics in the Taekwondo event and the second woman ever in the nation’s history.

Recieving the student on behalf of the Vice Chancellor of the Federal University of Technology Owerri FUTO, the Deputy Vice Chancellor Statistics Prof. Emeka Oguike commended Anyanacho for her Olympic debut, and reiterated the University’s commitment to students development.

He said: “We commend Elizabeth for her performance at the Tokyo Olympics, despite being four years early in her training plan. She is a good example to our students to work hard on all fronts. The University will continue to  create an enabling environment to ensure students can develop on various fronts.”

The Deputy Vice Chancellor also lauded the historic Olympic history of the University.

He said: “We are proud that a FUTO Alumna trained a FUTO student to become an Olympian. We are the only university to boast of having two Taekwondo Olympians and one Olympic Medalist. It is a history we are proud of and hope we can build on in the future.”

Prof. Oguizie expeessed high hopes that females in the community could be inspired with the ventures and achievements of Elizabeth.

He described it as befitting that the first female Vice Chancellor of FUTO is welcoming the first female Taekwondo Olympian of FUTO adding that this will serve as a source of inspiration to female students of the institution and the entire community.

In his remarks, the Commissioner for Youths abd Sports Development in Imo State, Hon. Ogu Chike, congratulated the University and Anyanacho on the sporting feat.

The Commissioner said that Imo state is proud of Anyanacho, and proud of FUTO’s support in producing two Taekwondo Olympians assuring government effort towards finding ways to harness this experience to ensure the state keeps producing top elite athletes across various sports.

In his speach, a 2004 bronz Olympic medalist for Nigeria in the Olympics held in Antgene, Chukwumerije who graduated with a B.Eng Mechanical from FUTO in 2005, expressed gratitude to the University management for extending the needed support to Elizabeth 15 years after.

He said: “I was in FUTO when I participated in my first Olympics – Athens 2004. This University fully supported me and made it possible for me at that time to also succeed outside my academics”.

He said that he was thrilled that FUTO has maintained it’s policy of supporting students developing their talents outside of academia, while calling on other universities to emulate the step.

Responding, Elizabeth who returned to the university a fortnight ago also expressed her appreciation to the school authorities for their support.

“I want to thank the University for supporting my Olympic journey. It was very difficult to combine my studies and training. The university gave me exemptions and permissions at critical times that enabled me train and qualify for the Olympics and participate at the Olympics.”

Highpoint of the visit was the presentation of official pins and Tokyo 2020 token to the University leadership by Chukwumeriji.

innonews - May 22, 2018 0
One Mr. Obinna Ozoemena has been declared wanted by the Imo State Police Command for allegedly killing his cousin. Online reports quoted the Police Public...

innonews - February 9, 2018 0
There is disquiet and murmuring among some top chieftains of the All Progressive Grand Alliance, APGA  in Imo State over moves by a top...