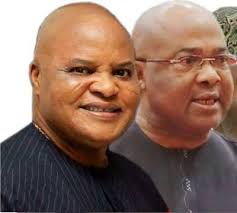 Chief Hope Uzodinma recently fought almost with his life to stop Senator Ifeanyi Araraume from returning to the Senate. The reason was simple: an Araraume in the Senate would portend danger to the political survival of Uzodinma’s feeble, unstable and wobbling regime.

Araraume, a serial and unrepentant governorship contender, as Uzodinma came to believe, only wanted the Senate as a ladder to his high gubernatorial hill. So, stopping Araraume’s rise would offer regime security to Uzodinma in the interim and make his renomination as the flag bearer of the APC seamless or less chaotic in the next electoral cycle. So, Araraume was stopped.

Two weeks ago, Uzodinma, after twenty-eight days of intense lobbying in Abuja which gulped untold sums of money, succeeded at bringing President Mohammadu Buhari to Imo State. The presidential visit turned out to be the biggest embarrassment Buhari has received all through his adult life. Apart from meeting completely empty streets in Owerri, he was shown a gutter, something that looks exactly like a rabbit hole, to commission. For Buhari, he never expected what he saw.

Interestingly, Uzodinma had a few months ago screamed and announced to the world, “Kumbaya, everybody, kumbaya! My magic wand has made millions of people in Imo State to register with the APC!” So, the least Buhari had expected to meet and greet were those millions of people, the new party faithful. And the retired Major General and National Leader of the APC saw nobody.

In his address briefly after the fruitless search for projects to commission, Buhari shrugged and wept to the hearing of everyone. He said, “I thought I was going to see the roads, the bridges and the flyovers.” And he saw nothing! Continuing in his parting remarks, the President, a man of few words, found clear and unambiguous words to express his disappointment, anger, disgust and shock. He said to Uzodinma, “I’ll be careful with your future invitations.” That statement summed up Buhari’s assessment of Uzodinma’s regime – a disaster-in-progress
and a failure undeserving of presidential attention and visit.

On his return to Abuja, topmost on Buhari’s mind became a necessity to dismantle the tyranny of Uzodinma in Imo APC as a prelude to his eventual political obliteration. The President quickly invited Senator Rochas Okorocha for a private chat. Recall that Okorocha and Uzodinma are actively engaged in a full-blown war. And, a few days later, President Buhari announced another of Uzodinma’s most dreaded foes, Senator Ifeanyi Araraume, as Board Chairman of the NNPC. This appointment, ill-timed for the shaky regime in Imo, is a declaration of war on Uzodinma by President Buhari.

There has been weeping in the political household of Uzodinma since this appointment was announced. There has also been gnashing of teeth. It is as if the doomsday is here. Not even the death of Ahmed Gulak, or the death of Abba Kyari, or the removal of Adams Oshiomhole, was mourned in this manner. For twenty-four hours, the propaganda machinery of the regime could not come up anything. At last, a lie, a very attractive but deeply illogical and politically incorrect one, propped up.

They are now saying that the appointment of Araraume is one of the benefits of Buhari’s visit to Imo State. This is one way they wish to nurse the wound and seek relief from the glaringly painful defeat they are suffering in a political war that just began. By such lie, they also wish to sustain internal allegiance to a regime that is fast collapsing. But this, too, has exposed them for whom they are and laid bare their reign of lies in Imo. Truth has taken flight from the governance of Imo State!

Remember how thousands of Imo youths were lured to Dan Anyiam Stadium with a promise of financial empowerment. Did Uzodinma empower any of them at last? Remember how Uzodinma brags that insecurity in Imo has been permanently addressed. Is there any week shootings and killings don’t take place in Orlu? Remember how Uzodinma claims to have solved 80% of the menace of flooding using his phantom and absurd balloon technology. Was the entire city of Owerri not submerged in flood just yesterday? Remember the tales of payment of salaries and pensions. Was Uzodinma, through his Accountant General, in a leaked memo not requesting for details of thousands of workers who have remained unpaid since March 2020?

Remember the claim by Uzodinma that 35,000 youths have been employed at Adapalm. Did you not watch the interview on BBC Igbo News where the General Manager of Adapalm came out to lament that the establishment was completely dead and in dire need of attention.

In deed, Imo is in the throes of a dysfunctional and disputed regime, and each day brings a lie which the next day multiplies. But it is no longer a battle of lies. Imo people are now wiser and the days of ruinous misrule are numbered.

innonews - March 6, 2018 0
Pensioners in Imo State have again cried out, lamenting non -payment of their pensions by the Imo State Government. They described their plight as “passing...

innonews - November 20, 2019 0
The founder of One Love Family, Satguru Maharaj Ji, has described the APC National Leader, Sen. Bola Tinubu, as fit and...

innonews - July 23, 2021 0
A peace deal said to be proposed by leaders of the All Progressive Congress, APC is in the offing, as part of...