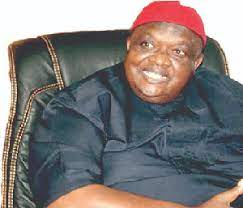 Elder statesman, Chief (Engr) Emmanuel Iwuanyanwu has resolved the crisis rocking the Alumni Association of the University of Nigeria Nsukka. The Alumni Association has been polarized in recent time with two factions emerging. One led Mrs Linda Onyekwelu and  the other by Sir. Ben Okoronkwo.

The resolution followed a high powered meeting convened by Chief Iwuanyanwu at the Nicon Luxury Hotel Abuja and attended by some egg heads Alumni of the institution including a former Aviation Minister Ambassador Dr Kema Chikwe,  a former permanent Secretary in the Federal Government Abuja, Engr. High Chief Johny Chukwu – who doubled as the Chairman of Reconciliation Committee.

Addressing the Peace Meeting.  Chief Iwuanyanwu expressed dismay and sadness the lingering conflicts in the affairs of the Association.

He observed that the University of Nigeria pioneered the frontier of functional education in Nigeria and Africa,  pointing out that the University did not only imbibe in its graduates excellent, intellectual and academic culture,  but a passionate desire to accept education as a tool for social and economic transformation of our society.

The great Engineering generalism noted that the alumni of the institution are blazing the trail wherever they are and recalled with nostalgia the comment by Dr. Nnamdi Azikiwe who said that ‘we are not only pioneers in a new frontier of transformation of Africa and black race but indeed Heroes and Heroines in all human endeavours. Chief Iwuanyanwu maintained that products of the institution are supposed to set the pace, the standard, and to show the light for people to find the way.

The Iconic Scientist who went into history and origin of the university informed the members of the Reconciliation Committee that UNN has a very proud heritage and since its inception, the alumni Association has played major role in shaping the economic and social destiny of not only Nigeria but Africa and various parts of the world.

Chief Iwuanyanwu reminded them that the crisis has affected adversely the efforts of the Alumni Association to achieve set goals and objectives.

He noted that all through history, Universities are citadels of learning whose curricula are usually designed to respond to the societal, cultural and economic needs of the people.

The Engineering Guru stated that the institution founded on the seventh (7th) of October 1960, seven days after Nigeria’s independence as the first autonomous indigenous University in the country with the Motto: to restore the dignity of man  occupies special place in the life of its graduates adding that the UNNA is intrinsically bound with the hopes and aspirations of their alma mater.

He said that with the crisis, much cannot be achieve in this direction and appealed that they must all unite as members to ensure that the crisis is resolved so that the University will match forward like a victorious soldier of light and develop in ensuring that Nigeria and Africa are changed from a continent of darkness to a continent of light as enunciated by the founder Dr. Nnamdi Azikiwe. Chief Iwuanyanwu appealed to all to put the interest of the alma-mater first before their personal interest.

In their speeches, all the members of the Alumni Association present advocated the immediate dissolution of the factional leadership of the parties and called for fresh elections to be conducted soonest.

In obedience to the plea and respect for the members, the leader of one of the factions Chief Mrs Linda Onyekwelu said having listened to the leaders, she was tendering her resignation to ensure that peace reigns in the alumni association.

Reacting to Chief Mrs Linda Onyekwelu’s immediate resignation, the Chairman of the Reconciliation meeting Chief Emmanuel Iwuanyanwu showered encomiums on her describing her as a great heroine.

Chief Iwuanyanwu thanked her for her courage and humility in resigning.

In his speech, the leader of the other faction Ben Okoronkwo said that he was ready to continue in office and serve out his tenure. But this was not accepted by members who therefore resolved through a communiqué signed by all the leaders that they accepted the official resignation of Chief Mrs Linda Onyekwelu led factions of the National Executive Council of the University of Nigeria Alumni Association and that the tenure of Sir Ben Okoronkwo’s led factions shall terminate on the 31st of December this year (2021).

The meeting resolved that the University of Nigeria Alumni Association shall constitute an Electoral Committee and also convene a National Convention by the first week of December 2021 in line with the 2014 Constitution of the UNNA.

innonews - October 23, 2018 0
Details has surfaced why the presiding Judge of FCT High Court, Bwari, Justice Othaman Musa adjourned hearing indefinitely on the tussle for the governorship...

innonews - October 13, 2018 0
*BY SHEDRACK IBEAWUCHI* There is more confusion in the All Progressive Congress, APC in Imo State. Who is the party’s governorship candidate has continued to...

innonews - March 7, 2021 0
There was commotion at World Bank market, New Owerri, when parts of the market were demolished by officials of the state government...