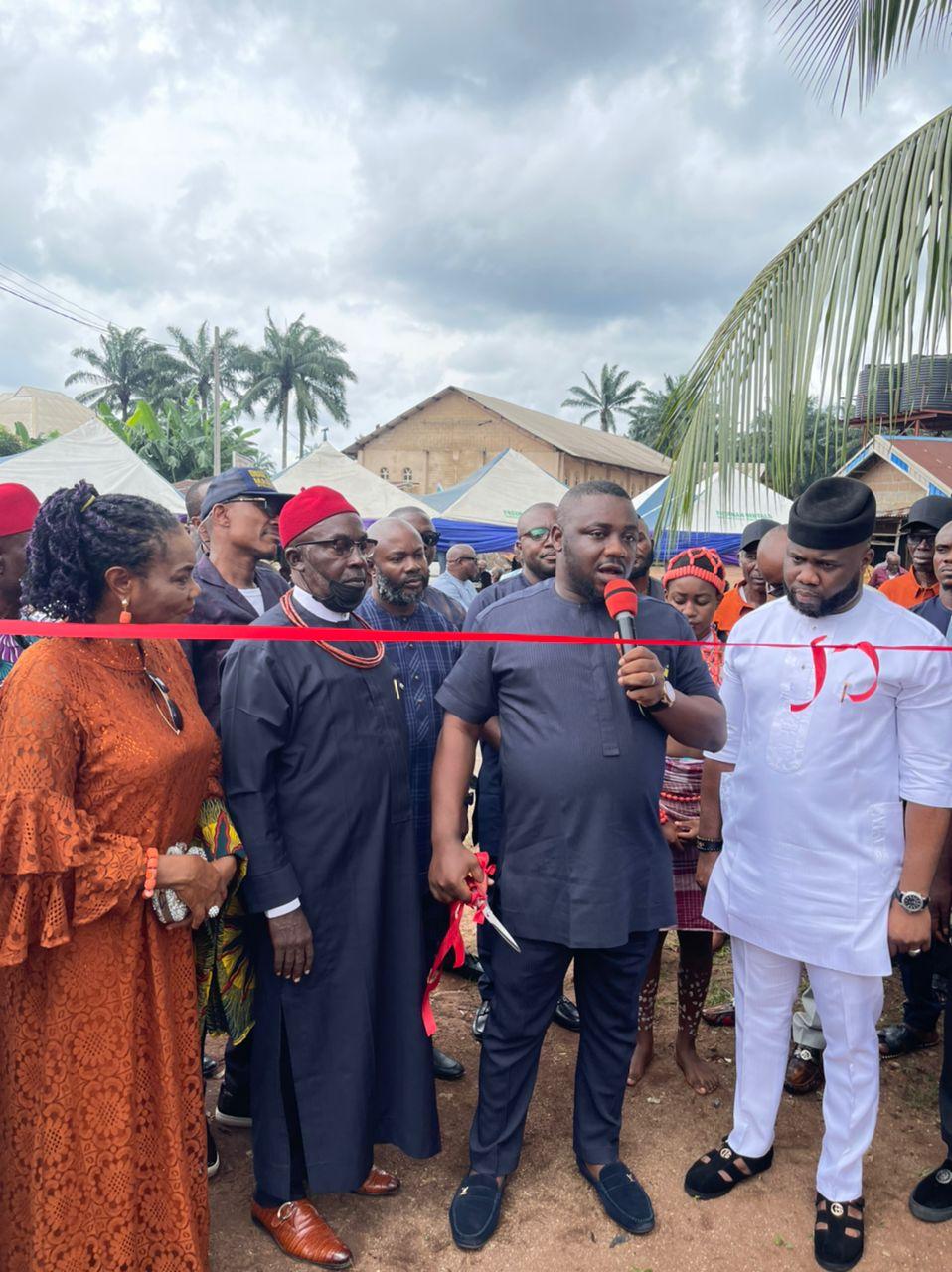 The indigenes of Owalla Autonomous Community of Owerri North LGA of Imo State, were on high and gratifying spirit as they welcomed the House member, representing Owerri North State Constituency, in the Imo State House of Assembly, Hon. Amb. Philip Ejiogu, for the commissioning of the 33 KVA transformer, donated by him to end the three years agonizing periods in the community without electricity.

It would be recalled that Owalla Community has made personal efforts and several entreaties to relevant authorities to get this nightmare out of their community, but none has yielded a positive response.

Amidst fanfare and jubilation for a hope restored, the Women, Youths and Elders of Owalla Community, showered prayers on Hon. Philip Ejiogu for, not only donating the Transformer, but ensured it was energized and operative to end the misery of this Community.

The Traditional Ruler of Owalla Community, HRH, Eze Okechukwu Nwaneri, was filled with undiluted happiness. He thanked and blessed Hon. Philip Ejiogu for rescuing his kingdom from Three years of agony. He recalled how frustrated the indigenes of Owalla became due to the poor outcome, recorded from their personal efforts.

Present at the commissioning, was the PDP Chairman of Owerri North LGA. In his short address, he summarized that it is the character of PDP elected members, to always come to the rescue of her citizens irrespective of their present status in Government.

He expressed much amazement that Hon. Philip Ejiogu could achieve this rare feat at a time he was among the members being maligned in the House of Assembly and denied of financial encouragements.

The President General of Uratta town union, Barr. Canice Madukaji (Obulimba), poured encomiums on Hon. Philip Ejiogu and assured him of the support of Uratta clan, now and his future political quest. He expressed dismay that the Government should not have allowed the Community to suffer this negligence as Owalla Community is the host Community of the LGA headquarters.

In his response, the Hon. Ambassador Philip Ejiogu, expressed thanksgiving to God for providing the resources and courage with which he was able to come to the aid of his constituents, irrespective of the condition he found himself at the House.

The highlight of the event was the cutting of the ribbon to signal the commissioning of the transformer by a close friend of Hon Phillip Ejiogu, Engr Amanze, a contractor based in Rivers State.

He thanked HRH, Eze Okechukwu Nwaneri, for all the efforts he made with the people of Owalla in rescuing themselves from the electricity challenge. Hon. Philip expressed hope, that irrespective being a member of opposition in the Assembly, God would enable him to do more for the community in time to come.

In his usual character, Hon. Philip Ejiogu  gave financial support to some indigent women who were present at the occasion. He reassured that he would always put women first, in all he does.

Also, the event witnessed a brief stop over by some leaders of Owerri North who were returning from APC LGA congress, such as Prince Alex Mbata and Chief Henry Njoku (Harritex) who commended any effort to develop Owerri North irrespective of political affiliation.

The ceremony came to an end with the conferment of honorary citizenship of Owalla Autonomous Community, to Hon. Amb. Philip Ejiogu, by the Alaoma Owalla, HRH, Eze Okechukwu Nwaneri, who also reserved for him, the Chieftaincy Title of ENYIOHA OWALLA

Osibanjo: I Made Financing Arrangements For NNPC, Not Approval For Contracts

innonews - October 12, 2017 0
Vice President Yemi Osibanjo (SAN) has said he only granted approvals to financial arrangements for the Nigeria National Petroleum while he was Acting President...

innonews - July 3, 2018 0
The South East rally of the All Progressive Congress, APC is billed to hold today at the Dan Anyiam Stadium, Owerri. The rally is...