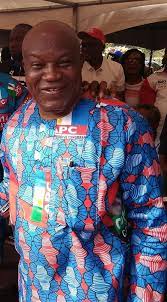 State congress of the ruling All Progressives Congress, APC holds on Saturday, October 2, 2021.

With the camp of former Governor Rochas Okorocha completely schemed out of affairs of the party in Imo state, after their non participation in the ward and local government congresses, the coast is all clear for the camp of Governor Hope Uzodimma, to retain 100 percent hold of the party structure in the State by electing the state executives of the party.

The race for the chairmanship seat has been lukewarm and cold even within the camp of the Governor, because those interested in the number one seat of the ruling party in the state are watching the body language of Governor Uzodimma, who will determine who leads the party for the next four years.

It was also unclear if the caretaker committee Chairman, Marcel Nlemigbo will be returned unopposed or not.

However, the national leadership of the party in a statement signed by the National Secretary of the Caretaker/Extraordinary National Convention Planning Committee, Sen. John Akpanudoedehe. revealed that it would commence the sale of nomination forms on Wednesday, September 15.

The statement urged all interested aspirants to purchase their forms in the various state APC Secretariats and in the unlikely event that they are denied, they are at liberty to approach the National Headquarters to obtain same.

innonews - November 12, 2020 0
SECG has remained relentless in the pursuit for the actualization of Igbo Presidency in 2023 The South East Coalition...

Imo 2019: I Have No Interest In Canal Endorsement- Eze Madumere

innonews - March 23, 2018 0
Apparently unfazed with the no support he is getting for his governorship ambition from his boss, Governor Rochas Okorocha, Imo State Deputy Governor, Prince...

innonews - February 21, 2021 0
FROM = EVEREST EZIHE, Owerri Fresh facts have emerged that the age-long frosty relationship existing between the Federal University...