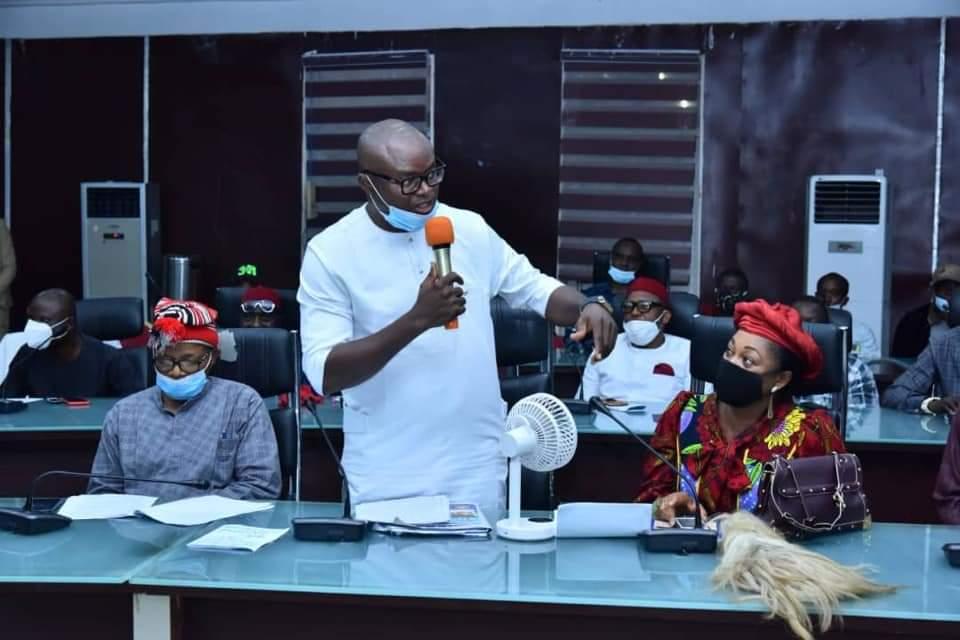 The Council boss refuted claims by the Police that he never invited men of the Force to protect and secure the Council before the commencement of the meeting of the traditional rulers.

In a report seen by this newspaper, Iheanacho said he scheduled three programmes for October 19, 2021 at the council headquarters, Nnenasa which include “distribution of 20,000 exercise books to heads of primary and secondary schools in Njaba LGA, Njaba LGA Stakeholders meeting for submission of community project needs for Imo State 2022 budget and monthly meeting with  Njaba LGA Council of Traditional Rulers”

He wrote “In order to ensure security of lives and property during the meeting, I called one ASP Nwankwo, who leads the Njaba LGA Police Operation Search and Flush Team on 18 October 2021 and requested the presence of his team at the council headquarters the next day for the above programme. He agreed to come with his team. The police also came to the council headquarters on 19th October 2021 with his team as agreed.

“But shortly before the commencement of the programme, the leader of the police team, ASP Nwankwo came to my office and informed me that their commander instructed them to return to Owerri. I refused to allow them to go in order to avoid jeopardizing the security of lives and properties in the environment, but they insisted to go. They finally left and told me that they would be back before the next two hours.

“The HOD Works of the Council, Mr. Emeka Uneanya, and a vigilante security officer of the council, Mr. Ernest Okorochukwu were witnesses to the argument between me and the police team leader in my office. Our meetings and programme however commenced as we hoped on the return of the police team as they promised. But three hours after the commencement of the meeting, we did not see them. I then called the team leader to know why they have not come back, but he told me that their commander had not yet released them.

“Our usual monthly meeting with the traditional rulers which happened to be the last programme for the day was about to be concluded when we saw some armed men approaching the council hall where the meeting was taking place.

innonews - August 16, 2021 0
Federal lawmakers, comprising three Senators and eleven members of the House of Representatives from Imo State, are trailing their counterparts from Abia...

innonews - December 5, 2017 0
Lionel Messi’s statue in Argentina has been hacked down by irate Argentines in Buenos Aires for the second time. The FC Barcelona forward bronze sculpture...

innonews - October 31, 2017 0
The Imo State government has denied reports in the media that the Chairman of the Imo State Council of Traditional Rulers, Eze Sam Ohiri...