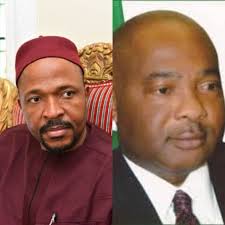 The camp of Minister of State, Education, Hon.Emeka Nwajiuba, Friday, said there is no rift whatsoever or collapse of its alliance with Imo State Governor, Senator Hope Uzodimma.

Nwajiuba had jointly worked with Governor Hope Uzodimma to ensure victory for Frank Ibezim, the APC Okigwe zone Senatorial candidate, who floored other candidates to be elected Senator for Okigwe zone.

He said the allegations emanated from those who lost out in the power play in the All Progressive Congress, APC in Imo State.

He said “Nwajiuba remains a member of the APC and he has no choice than to obey the rules of his party. He is relating well with his governor. The governor remains the State leader of the party. It has not changed” he said.

Ogubuike added that Nwajiuba strongly believes and appreciates the leadership of Governor Hope Uzodimma and will continue to support his administration in the onerous task in taking Imo State to the next level.

England Take Over From Nigeria As U-17 Champions

innonews - October 28, 2017 0
Nigeria’s Golden Eaglets have been dethroned as U-17 World Champions after they beat Spain 5-2 in the final. They came down from two goals down...