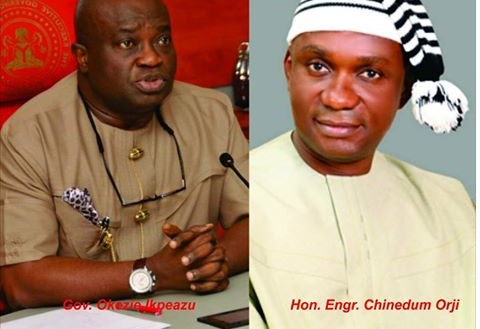 Abia State Governor, Dr Okezie ikpeazu and the speaker of the state Assembly,Engr Chinedum Orji are in collision course over which of the three senatorial zones should produce the next governor in 2023.

While Ikpeazu is said to be in favour of another Ngwa man succeeding him, Chinedum Orji prefers that the slot should go to Abia North in line with the rotation agreement in the state.

It was gathered that the proposal by Ikpeazu to hand over to his kinsman, though from Abia central zone was flatly rejected by the Speaker who insists that the plum job be ceded to Abia North where the rotation started in 1999.

Abia North produced Orji Uzor Kalu in 1999 while Abia central took its slot in 2007 under Theodore Ahamaefule Orji who handed over to Ikpeazu from Abia South in 2015.

It is instructive that without the insistence of Theodore Orji,it would have been tough for Abia South to produce the governor.
The agreement among the leaders of the state was that after Abia South, the governorship will revert to Abia North.

However,a meeting held by the governor and other stakeholders recently got stormy when ikpeazu proposed that instead of Abia North, his successor would emerge from Abia central.

Although the speaker hails from Abia central,he believes that the governor’s proposal may rob the ruling PDP of the post in 2023 because it is against the Abia charter of Equity.

Those who supported the speaker’s position were angry that the governor who is from the Ngwa area wants another Ngwa man from Abia central to succeed him.

Apart from the fear of domination by the Ngwa area, the people are afraid that the opposition APC might cash in on the disagreement to field a candidate from Abia North.

However, a former national organising Secretary of PDP,Col Austin Akobundu supports the governor because he wants to represent Abia central in the Senate in 2023.

His strategy hinges on the fact that if the governorship is ceded to Ngwa area of Abia central,it would pave way for him to run for Senate since he is from the Umuahia axis of the zone.

The governor who is rumoured to be interested in the Senate seat in 2015, offered the speaker the ticket of PDP for Umuahia/Ikwuano federal constituency.

” Just the other day ikpeazu praised TA Orji for making it possible for power to shift to Ngwaland. Now he wants to frustrate the smooth running of the same charter of Equity that brought him to power”, the source fumed.

The source called on the incoming national Executive of PDP to take more than a passing Interest in what is happening in Abia before APC captures the state.

Group: Imo APC, A Flashpoint That May Affect Buhari’s Chances In...

innonews - August 13, 2018 0
A report by a group of political strategists said to be working for the re- election of President Muhammadu Buhari in 2019 has cited...

innonews - April 21, 2020 0
BY RALPH EJIMKONYE Two South East Governors and three of their counterparts in other states of the...

innonews - April 25, 2018 0
Following newspaper reports that a particular governorship aspirant of the All Progressive Grand Alliance, APGA has been endorsed by some aspirants in the party,...

innonews - October 1, 2017 0
There are strong indications that the planned ban on Keke operators in Imo State may have been shelved to December 1st. Reports said at the...