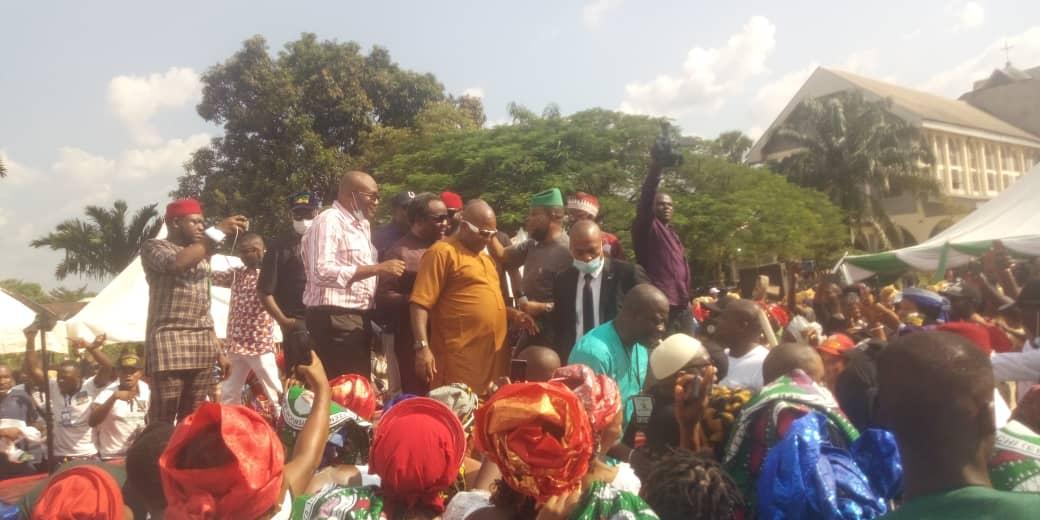 Some political leaders of Owerri Zone have vowed to produce the next governor of Imo State, insisting that they are determined to succeed in the task.

The leaders, mainly drawn from the Peoples Democratic Party, PDP, stated that they posses all it takes to accomplish their mission.

Rising from the 4th Anniversary of Egbu Declaration with the theme “Imo: Mmegbu Adighi Mma (meaning injustice is not good), held at All Saints Anglican Cathedral, Egbu, the leaders called on sister zones- Orlu and Okigwe- to support their quest to produce the next governor of the state in 2023, on the basis that equity and fairness demand so.

They took a swipe at the Hope Uzodimm administration, lamenting that hunger and insecurity have bedeviled the State, since the APC led government took over governance of the state through the backdoor.

They lauded the ousted governor of the state, Emeka Ihedioha, for exemplifying good governance as he met the expectations of the people of Imo State during his seven months stay as governor, assuring him of the support of the people of Owerri zone if he decides to run for the governorship seat of the state in 2023.

Parts of the communique read: “The Summit appreciates the people of Orlu and Okigwe Zones for harkening to our cry by massively electing an Owerri son as governor of Imo State in 2019, but notes that the unfortunate Supreme Court judgement of 14th January, 2020, has worsened the situation on the political equation in the state. The summit commends His Excellency, Rt Hon Emeka Ihedioha, for making Owerri Zone and indeed Imo people proud during his seven months stay in office by addressing the myriads of administrative and infrastructural challenges head-on, assuring him that history will not forget him.

“The Summit noted with appreciation the brotherhood, solidarity and commitment exhibited by Owerri elders, religious and political leaders, captains of industry, professionals, artisans and socio- cultural organizations during the 2019 elections and urged all not to relent in the enthronement of equity and fairness in the state come 2023”.

The leaders also accused the APC led government in the state for orchestrating  misrule, dictatorship, fanning discord, insecurity,  unemployment, lack of infrastructure in the state, blaming the shared prosperity administration of doing practically nothing to reducing suffering, killings, maiming, arrest, detention  of innocent helpless citizens of the state by the military and police.

They expressed regret that the demolished Ekeukwu Owerri ancestral market is yet to be rebuilt and remodeled by the present regime which it warned to stop playing politics with the welfare and wellbeing of the people who it mentioned should not be neglected.

“The summit observes the precarious security situation in Imo State which has rendered many women widows and children fatherless, as well as kept many innocent Imolites in police custody and prison yards. It called on the government of Imo State to begin a healing process by halting the trend and reaching out to families of the victims. The killings of our young men and women since the administration of Senator Hope Uzodinma in Imo State is unprecedented in the history of the country, except during the civil war. We ask, must the blood of all our youths be poured on the streets of Imo State to sustain this administration”?

Speaking, the Special Quest of Honor, Rt Hon Emeka Ihedioha, who appreciated the people for believing in him, democracy and the course of Owerri Zone, promised to remain faithful to the course of Imo State by maintaining “those tenets of democracy that stand us out and I shall do well when I’m reelected as governor of Imo State. Keep your eyes on the ball of Imo Douglas House. Egbu Declaration has indeed become our own Magna Carta, a watershed in the enduring quest for a bond and profound love among Ndi Owerri”.

innonews - July 9, 2018 0
Chinonso Uba (a k a Nonsonkwa) an APGA aspirant has been tipped to win the 2019 Imo House of Assembly elections for Mbaitoli state...

innonews - April 1, 2019 0
BY: CAJETHAN IKE, Editor At Large There is high level intrigue and horse trading over who becomes the...

innonews - December 20, 2017 0
Innoson Motors is one of the biggest employers of labour in Nigeria after the Federal Government. Innoson Group has more people on its payroll...