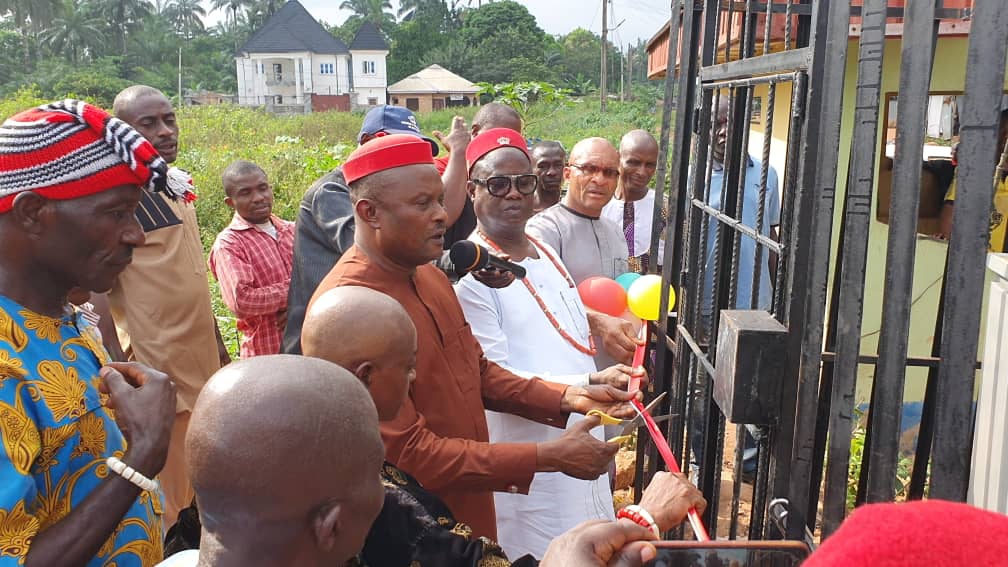 Last Saturday, Umueze Ogwa Community in Umueze/ Abazu Ogwa autonomous community in Mbaitoli Local Government Area of Imo State was agog in celebration following the commissioning of their brand new
33 KVA transformer and restoration of their light after more than two years of staying in total darkness and frustration of socioeconomic activities.

Commissioning the transformer at their Ogbomii Market Square sub station, Hon. John Eke, the Interim Management Committee (IMC) Chairman of the council area praised members of the community for their patriotism in developing and transforming their community through communal efforts

Akuchie passionately appealed to the Local Government chairman and the state government on the need to remember the autonomous community especially in roads construction, rehabilitation and maintenance describing the community road networks as death traps.

In his speech, Rotarian Everest Ezihe, the President General of the autonomous community and the President, Umueze Patriotic Union Interim Management Committee expressed happiness to sons and daughters of Umueze Ogwa for their contributions in ensuring the timely realization of the project.

Ezihe lamented over lack of infrastructural development as well as government presence in the community and advised both the state and local government on the critical need of given priority attention to the area especially as it concerns her roads, schools, market and health center rehabilitations.

Mr. Eddy Iwuanyanwu, the chairman of the Electricity Committee in his vote of thanks expressed gratitude to members of the community for their brotherly love and unity of purpose.

Iwuanyanwu assured that the transformer will serve the people and canvassed the need for adequate security within the community.

Hon. John Eke, the IMC Chairman of Mbaitoli shortly after the commissioning of Umueze Ogwa 33 KVA transformer and some dignatries from the community. Pix by Everest Ezihe, Ogwa.

APC Technical Committee On Tenure Elongation Gets Terms Of Reference

innonews - April 4, 2018 0
A Special Committee set up by the All Progressive Congress National Chairman, John Odigie Oyegun has received its terms of reference. The Committee was set...

innonews - December 9, 2017 0
Four vehicles and generating sets and 300kva transformer were among many items consumed in the fire outbreal that rocked Newton Hotel, Owerri. No lives were...